I'm taking a look at a new magazine (for me) today with Urban Fantasy Magazine. I heard about it some time ago but never really got over there, something that I will likely rectify now. It's quite a bit of fun and the two stories that I'm looking at this month are well worth reading. Plus there's more stuff that I'm not going to be looking at (at least not in this review...might be back to peek at the nonfiction but unfortunately it's not out yet). Still, it looks like here is a new market that I'm going to be stopping back at. Which is always a good find. 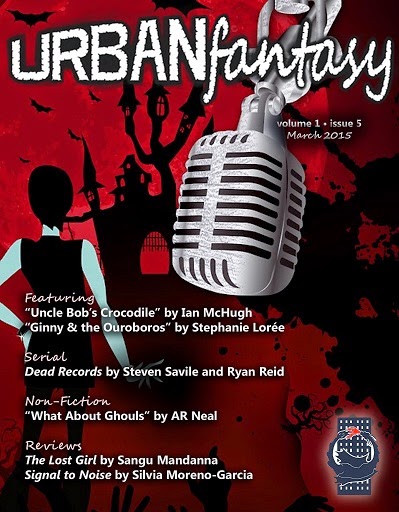 A story about magic and sisters and the pull of starting everything over again from nothing. This story definitely has style and a great sense of character, with Ginny tired and tread upon. She's picked up by the police, and even if it is a good looking cop with blue, blue eyes, it's still hassle for who she is and how the system has let her down. Ginny is someone who has seen a lot of ugliness and retreats into the simplicity of plants, into the growth and decay. And she still loves her sister, who she's had to watch fall further and further into tragedy, leaving nothing but scars. They both have power, but it's Ginny's who is greater, and more destructive. She holds life, and her sister Dakota holds death. But runaway life is way scarier, and the end of the story settles there, with Ginny wanting to wipe the slate clean and start over in a place where the deck isn't stacked against her. It's a mix of hope and annihilation in this story, the hope that if we actually cared for people maybe this would have been avoided. Maybe if people actually helped. As it is the story ends with an ending of sorts, with a great dragon of plant and earth rising up to end the world. I really liked this story, the power of it, the yearning of Ginny for a place where she can be happy and her sister can be safe. Good stuff.

This story seems to be about letting go, and about not letting go. In it a young man has to care for his granduncle, a veteran who served in Vietnam and who lost a twin brother there. Now he suffers from PTSD and dementia and the stories does a good job of making those two things part of him while not making him completely a joke. There is humor made there, certainly, but it seems to stem more from Bob as a character rather than Bob as a sufferer of mental illness. It seems like he's just a weird guy regularly, and his afflictions are never mocked. So that's good. It turns out that Bob is still searching for his brother, who was never confirmed dead, and believes he's finally found him. The main character, meanwhile, has recently suffered a breakup with a long-term boyfriend who moved back to Ireland, and there's some pain there because he wants to go, wanted to go, but feels it's too late and that if he does go no one will look after Bob. It's handled well and I liked the two goals the men have, both not wanting to let someone go. In Bob's case, though, he manages to track down his twin thanks to a weird homemade machine and a monster, only to learn that his twin wanted to leave and doesn't want to be saved. It means Bob's life work is crushed. He has to learn to move on, to find new purpose in his life. Just as the main character has to learn that he has to try to reconnect with his ex. That he has to give them a chance otherwise he'll always be chasing that ghost, that possibility of what they could have been. And while Bob's mission failed, it doesn't mean that all missions do. It just means that when they do, you have to move on. It's a strange story but beautifully told and well worth reading. So hurrah!
Posted by Charles Payseur at 1:00 AM