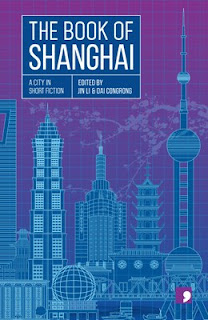 So I admit I wasn’t quite sure what I was getting into when I agreed to look at this anthology. I’m no stranger to translated fiction, but my reading is heavily SFF, and this collection doesn’t pretend to be trying to be entirely that. Most of the stories are fiction, many with moments of weirdness, of dream-like fluidity, but few are really speculative in nature. Rather, the anthology seems to be (from what I gather from the introduction and from the mood and themes of the stories) an exploration and a sort of mapping of the city of Shanghai, its literary movements and moments--a feel of what the city is to those writers who know it, who might bring it to life in some ways as a character. And so we have The Book of Shanghai: A City in Short Fiction from Comma Press.

In that I think the anthology is largely successful, though I found it hard to come up with any sort of pithy condensation of the “personality” of Shanghai from it. What I did find, though, were stories about streets, about mazes, about crowds and identity, about relationships and isolation. Shaghai is an enormous city, and yet most of the time the stories keep things very grounded, very small. The result for me is an anthology that paints the city as a great many cities. Some as big as a district, or a street, or a single building...some only as big as one person, everything else a haze, a fog, the impression of a city but removed, waiting, lurking. The characters here often struggle with the weight of the city around them, the added gravity it seems to exert. Their dreams, large and small, often end up being chewed up and spit out. Not that there aren’t moments of joy and peace, as in the story that kicks off the collection, “Ah Fang’s Light” by Wang Anyi, where a man interacts with a young fruit vendor on a quiet and often rainy street. There’s more than just pastoral tranquility, though, and perhaps my favorite piece in the anthology is “Woman Dancing under Stars” by Teng Xiaolan, where a newly-married woman meets an older widow and learns some valuable lessons about self care.

Aside from the moments of joy, though, the collection often dips into rather grim territory, to piles of corpses for the sake of creative economics in the darkly hilarious “The Novelist in the Attic” to the tragedy of an old woman whose devotion to her son takes on a dehumanizing turn in “The Story of Ah-Ming.” And it’s in the bleakness that I often struggled with the collection, because these are often difficult things to face. Important ones, but I’m not sure I’d recommend just sitting down and reading the whole cover to cover, because though it flows nicely and offers a clear trajectory, it’s one that ends in the dream/nightmare of Chen Quifan’s “State of Trance,” a story about a man trying to return a library book at the end of the world, at the end of human cognition, where people have completely lost the ability to think and process. The final stories of the collection are more strange, more dream-like, and focus on the ways people can be lost, can disappear, can be devoured by the streets, rivers, and buildings.

For all the darkness, though, it’s still a beautiful read, and the stories reveal a place poised between destruction and construction, where people try to make their lives and make connections and sometimes find that rare and wonderful moment...but often fall a bit short. For me the collection is definitely worth checking out and spending some serious time with, but it’s certainly not a light read, and readers should go in expecting something of a challenge. Still a great experience, though!

[I’m still figuring out how to do these collection reviews. Not individual reviews, but here are my brief notes on the stories as I read them]

“Ah Fang’s Lamp” by Wang Anyi (t. Helen Wang)
Strange and lovely, if just a bit haunting. A fairy tale, it’s called, and perhaps it is, almost magical in its light touch.

“Snow” by Chen Danyan (t. Paul Harris)
A story about lonelines, and sorry but avoiding your parent by reading inside a KFC is just hilarious. I love the way the observations here are all pointed outward, then slowly curl in.

“Bengal Tiger” by Xia Shang (t. Lee Anderson)
A strange kind of tragedy, where reckoning with the past brings maybe too much to the surface. Rocky is scary, tbh, but gets things done.

“Woman Dancing under Stars” by Teng Xiaolan (t. Yu Yan Chen)
Beautiful story about the importance of joy and self care in relationships, in marriage, in everything. About dancing, about stars, and about strangers meeting.

“The Novelist in the Attic” by Shen Dacheng (t. Jack Hargreaves)
Darkly hilarious. I mean, I love the idea, the sense of pressure and indecision, hurt and longing.

“The Story of Ah-Ming” by Wang Zhanhei (t. Christopher MacDonald)
Kinda messed up but really a sharp story about how people, especially the elderly, can be treated and valued. And, in turn, reflects how people treating other people like garbage shows their own rot.

“The Lost” by Fu Yuehui (t. Carson Ramsdell)
A strange take on social media and the fragility of those connections, the way they get into identity and reality itself.

“Transparency” by Xiao Bai (t. Katherine Tse)
An interesting web of lies. I like the private investigator angle and how through the digital space a whole fake world can be built and populated.

“Suzhou River” by Cai Jun (t. Frances Nichol)
Weird and dreamlike, capturing the maze-like qualities of the city and its people, the meeting of so many different people, and the way the river unites them in the streets and veins of the city.

“State of Trance” by Chen Qiufan (t. Josh Stenberg)
Continuing on that dreamlike feel, here is an end of the world while the narrator wants only to return a library book. Haunting and striking, it combines text created using AI-driven algorithms “taught” the author’s style. The result is deeply strange and brings the second person narrative back into the first person.

Posted by Charles Payseur at 3:37 AM