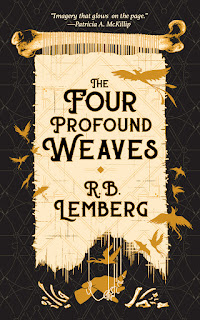 Birdverse is back and in book form! It’s happening, people!!! And I’ve been lucky enough to get an ARC of it! Which means it’s time to jump back into what has been one of my very favorite settings ever! This time we’re following nen-sasaïr and Uiziya, two trans elders who have lost too much of their lives to waiting and denial. They are ready to take action, to seek out their hearts’ desires. Only figuring out what that might be and reaching for it are two very different and (it turns out) dangerous things. It’s a story of community and change, hope and death, and I can’t wait to get to my review!

No Spoilers: There are four profound weaves in the desert, made using wind, sand, song, and bone. They deal in change, wandering, hope, and death respectively. And in this desert nen-sasaïr, a recently physically-transitioned trans man still looking for his name, and Uiziya, a trans woman who has dedicated most of her life to waiting for her teacher to reveal to her the secrets of the four weaves, have come to think of each other as friends. But neither of them are entirely happy with where they are, and both feel that, as elders, they’ve lost out on a large chunk of their lives. Resolving to do something about that, they set out together across the sands in order to find the secrets that Uiziya has long felt denied of. What they find is something more, as both must confront a complex web of corruption, pain, oppression, and death. For that, it’s not a bleak story. Riddled with pain, just, but with a rich breath of resilience and strength. It’s a great introduction and return to a setting that I dearly love, and it balances magic and power, family and culture, identity and history, with a deft touch and stunning clarity.
Keywords: Magic, Names, Trans MCs, Weaving, Collecting, Family, CW- Abuse, CW- Torture
Review: There is so many layers of hurt here. Differences in culture, in timing, in abuse, in language. nen-sasaïr knew he was a trans man for a long time, stifled that part of himself because his partner didn’t want to accept it. Because he had already lost, because he felt completely alone. He carries the scars of being treated like a woman and because of his transition he’s often expected to either ignore all of it and pretend he’s always been treated as a man or else act like he used to be a woman and has only recently become a man. The truth is more complicated than those easy lines, and the story does a careful job of exploring what that means. For him, and for people around him. Which is complicated by the social roles of his culture, the divide between men and women. Something that Uiziya, who is trans herself but transitioned at a much younger age, understands in shades but still not fully. Nor is she understood fully, in turn.

Trauma’s a bitch. If I could write a subtitle for my reading of this book, that might be it. Because it’s so much about trauma, and the ways that these characters have been broken. Repeatedly. Often intentionally, but occasionally accidentally or incidentally. The ways they’ve been violated by people who they trusted and loved, who were supposed to love them, and perhaps did, but in some rather selfish ways. And the systems they’ve grown up in and those that have been forced on them are designed to deepen, perpetuate, and reinforce those hurts and traumas. Now, old and relatively unmoored, they’ve decided to try and...find where they are in the world. What’s still possible, after what seems a lifetime of self and imposed denial and oppression. Which brings them into direct confrontation with their pasts, with some of the people who have hurt and helped them. Who continue to hurt and help them.

Change isn’t the end of a journey. It’s the start of one. And so the progression of the piece mirrors the four profound weaves. From change to wandering, as the two characters set out across the desert. As they search for their own ways forward, to pull back from the past things that have been taken from them. From wandering to hope. To finding what they were looking for, and discovering that it really wasn’t what they were looking for. From hope to death. And I love what the story does with that, because death is so often associated with abuse, with defeat, with destruction. And for a while it seems like that’s the trajectory for nen-sasaïr and Uiziya. That their journey will end in death, in having come so far only to run into the same walls of violence and hate and injustice. But that’s not the entirety of death.

The four profound weaves might seem like a linear path, and indeed the characters seem to follow that path through the story. But they’re also dealing with the narratives that they’ve inherited, that other people have tried to impose upon the land, the Weave, and the divine itself in the forms of Bird and Kimrí. Separately, the four weaves seem to tell every person’s story. That begins in life and change and eventually arcs into death and loss. It’s the justification the Collector uses to fuel his power, that he is a sort of protector that saves things from destruction. From the finality of death. But the characters start to see that the weaves don’t have to be separate and distinct. That together they form something, change and freedom and hope and death. Together they make revolution. And it’s there that the characters find their strength, and their power. Not without cost. Not without consequence. But their story is not of two trans elders coming to their deaths to close out the journeys of their lives. Nor are their scars erased, or their pains made less complicated and visceral. They bring change, are changed, but that’s not the end of their journey. And I just love everything about that, about how they push back against the stasis, the Collector and his desire to hold everything in “protection.” Life is not neat or safe. It’s messy. Dangerous. And Bird peck it, that’s the way it should be! Because out of that mess comes a greater understanding of and compassion for people and all the ways they are different and hurt and beautiful.

As always, the piece offers a breathtaking and vivid introduction to a setting that is all about connections and patterns. Birdverse is beautifully rendered fantasy full of magic and adventure, but also achingly real in its depictions of intolerance, corruption, kindness, and family. There is a living quality to the world, and I love how this work simultaneously welcomes new readers while further rewarding existing fans who can appreciate the intricately woven details and connections of the setting at large. Birdverse remains a tapestry without a singular beginning or end, but rather a work of art that allows the reader to let their eyes wander the many scenes and cities, following threads from work to work (and across formats of poetry and prose) and always discovering more to explore and enjoy. A phenomenal read!