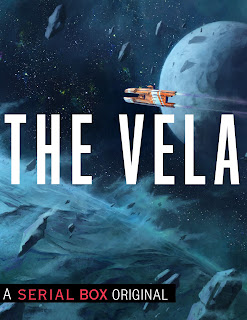 It’s my penultimate look at the first season of The Vela from Serial Box. And as the first season charges for its conclusion it pulls out all the stops. I know, I know, I didn’t think there were any stops left to pull, but the pacing is unrelenting, the impact devastating as Asala has to deal with having the people she trusts the most betray her. And worse, betray her because they don’t trust her, because they’re afraid that she might act in a way they don’t want, which they aren’t willing to let happen, despite that Asala is a professional and knows how to survive and how to fight, a skill that people should probably be deferring to. Instead, everyone is still sticking to their own agendas, something that seems poised to destroy everyone in a blaze of glory and spite. To the reviews!

No Spoilers: Asala and Niko are left a bit directionless following their last confrontation, and just as things seem like they can’t get worse...well, they do. This episode does an amazing job leading up to the reveal of what Niko’s been up to and who they’ve been working for all along. And it’s a piece that seems to push Asala past her breaking point. She’s done playing nice and subtle, and here she snaps into full Business Mode. Which means that people are going to die. Which might only be the smallest prelude for what the episode ends on. The action here does not relent, and the continued deterioration of Asala’s situation does not slow. And all the players are being drawn together as the season rockets toward its final episodes. And there’s the hope that maybe, possibly, this is the low point for Asala, betrayed and stranded and waiting for the next boot to fall. But then, it’s possible that there’s a lot further to fall yet. Either way, it’s intense!
Keywords: Betrayal, Queer MC, Trans MC, Food, War
Review: Let’s be real Bombom is now my favorite thing ever and I want my own adorable Bombom plush. Please make this happen, universe. But the episode is incredibly good at building up to rather distinct parts. In the first, we see Asala and Niko working together. She’s become their mentor, teaching them how to be an agent while they’ve given her something that she’s never really had before—a friend and backup in the field. Their time trying to get word to some of Niko’s contacts is fun and cute (and features Bombom so it just perfect, really) and show them working well together, finally jiving as a team. Which makes what comes next so much more devastating. Because after actively dismissing her concerns for the entirety of their trip, Asala finally figures out whose side Niko is on. And the shock of that is just shattering. It leaves Asala without faith in people and with fucks to give as she decides she’s done with playing it safe.

The breaking of the fellowship between Asala and Niko is just gutting because it’s been coming for so long but also because it’s impossible to blame Asala for being done. Niko’s “explanation” for themself is full of their same own issues, the same selfishness that has driven them from the start. And part of the problem is that they’ve framed things as them acting for the marginalized against their oppressors. But their real goal seems to be to wash their hands of that oppression, to move themself into a place where they can be absolved of the history and the life that has given them every advantage. They’re working “for” the people of the outer worlds, but when people like Asala tell them how messed up that is, Niko doesn’t listen. They push forward with this idea that they are Right, that they’ve been blessed by the oppressed and made essentially an honorary member. They still see themself as something of a savior, and their interest still seems to be to resolve their own guilt rather than really interrogating and facing what’s happened. Asala, meanwhile, knows that there’s more to know, that this no one should rush into war, into genocide. And she wants so badly to find a way that will work, where she won’t become like those who have made her own life hell for so long. Which doesn’t mean that she’s unwilling to act, just that her actions are still trying to save as many people as possible, as leaving her options open, even though she knows that she can’t put off a decision indefinitely.

It’s another thrilling installment and plops this story just continues to not let up. The escalation continues and is now reaching the planetary scale as the sleeping giant of the inner worlds seems poised to get involved in a big way. Gone is the feeling that this is just an isolated mission or that’s going to be resolved quietly. With what’s at stake, it makes complete sense, and it really hammers home that this is the last hope of a solar system staring down the barrel of extinction. And it’s coming as a kind of desperation in a class of people form whom desperation is wholly foreign. So...this will get interesting. A fantastic read!

No Spoilers: Well if you thought things were going to slow down you really haven’t been paying attention. From the beginning this project has moved with a pace that has built and built, and with this chapter the shit is officially hitting the fan. The situation on the ground looks doomed, the situation in the space around Gan-De even more so. For Asala, Niko, and Soraya (whose viewpoint continues to expand), the situation is a giant clusterfuck that they’re trying to sort so that the most people possible will survive, but things aren’t exactly easy in that regard. They are constantly barely escaping death while pointing themselves vaguely at an outcome they can barely hope for, that they don’t even really know what it would look like. But they reach all the same, fighting against the tide of death because it’s the right thing to do, because it’s the only thing they can do aside from accepting death. It’s another thrilling and nail-biting episode, and one with its share of gutting moments.
Keywords: Gravity, Military, Queer MC, Trans MC, Refugees
Review: This episode opens with a gravity bomb and closes with a looming space battle, the opening of what could be the final war of the solar system—a battle for a future that everyone is trying to deny everyone else. Everyone, that is, except Asala and Soraya. It’s where the series has been bringing the characters for a long time, to a place where they have to make a decision. Where to stand? Asala has spent a long time avoiding the question, avoiding having to take a stand. Mostly she’s just wanted to survive, to be left standing, but she’s seeing that she can’t really afford to do that any longer. Because surviving will be allowing genocide to happen. So Asala finally makes her call, choosing to stand with the people of Camp Ghala, the refugees who have been struggling so hard, betrayed at every turn. It’s a satisfying moment when it happens, but even that isn’t without complication.

Oh, Asala. The series is just like one giant string of people kicking them while they’ve been down their entire life. And after all of that, after them finally deciding they are going to stand for the people who never really did anything to betray her...they betray her, too. Enter the almost-forgotten thread of her sister, who was part of the reason that she agreed to go looking for the missing ship in the first place. But since the trail went cold on Hapatia, it’s not really been something on anyone’s mind. Except that now, of all times, that particular puzzle clicks together and Niko passes along the info to Soraya who...understands what it means. And it’s another moment where my heart breaks a bit, because of the implications, because there are no real good options here. Soraya is all set to pass along what was found out when...she realizes that the information would be something of a distraction at best and might get Asala to go back on helping Camp Ghala at worst. But it’s another person who is trying to use Asala, albeit for a good reason. But for whatever reason, it represents another person treating Asala as a weapon, not trusting her to make her own decisions. And I am cringing at when this all comes out and Asala has to face just how much everyone has let her down.

And really, this is just a breathless, action-packed episode where things get fast and furious and don’t let up. There are so many balls in the air right now that it’s stunning to see Soraya and everyone try to keep them all in the air, to keep them all moving in hopes that they can all be saved. Or at least most of them can be saved. It kept me on the edge of my seat and it makes me hurt in my heart thinking about just how terribly this can all go. Which is to say that I am very invested in the story and can’t wait to see what happens during the season finale!

Posted by Charles Payseur at 4:48 AM