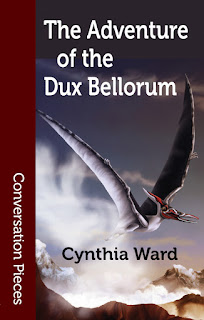 Following the alt historical queer romp through science fiction and gothic horror that was The Adventure of the Incognita Countess, this latest installment of the Blood Thirsty Agent series (published by Aqueduct Press in their Conversation Pieces line) leaves boats behind and takes the action to the continuing World War raging between the Allied and Central forces. Lucy Harkness is back, still in a relationship with the upióry Clarimal, and the piece keeps the literary references fast and furious while increasing the scope, scale, and carnage of the action. The pacing and feel are pure pulp, and the series continues to be a h*ckin’ fun time. To the review!

The Adventure of the Dux Bellorum by Cynthia Ward (novella)

No Spoilers: Following her escapades on the _Titantic_ and resulting determination to stay with British Intelligence with Clarimal at her side, Lucy is facing some disappointment that, well, Clarimal is not actually at her side, instead taking on covert missions in the heart of Germany. With rumors afoot that there’s a unit of wolfmen under the command of an old enemy, though, Lucy is dispatched to the front to protect a certain British politician and officer—Winston Churchill. The piece captures the same pulpy fun of the first book while also expanding the mythology and drawing on even more references to build a rather madcap caper on the Continent. At the same time, it complicates Lucy and Clarimal’s relationship, making them face their natures to some degree, and the nature of a world that might becoming safer for them even as it’s become much more dangerous as well. It’s a neatly balanced work and very fun, even if I’m certain I did not get every reference made.
Keywords: Vampires, World War I, Queer MC, Mind Control, War, Dinosaurs
Review: So the first book in the series was a lot of fun, and this book seems to ask “what if we just did MORE?!” It turns things up to eleven with regards to bringing in elements from a number of different works contemporary to the time, imagining a hollow Earth full of dinosaurs and gold, wolfmen and vampires that can be controlled with cranial implants, and a whole mess of wartime espionage (plus maybe a dapper Belgian with an impeccable mustache). It’s a bit Too Much at times, but that’s also the joy of the book, that it just embraces its conceit and runs with it, not apologies for the many numerous allusions and references. Not all of them might be familiar to all readers (I know I missed some), but they are Easter Eggs more than they are necessary to enjoyment. The book itself, after all, is just rather delightful.

And I want to say that I appreciate that the story doesn’t just brush off the many numerous problems of stories and attitudes of these times. It doesn’t suddenly make all of the characters modern Woke individuals in an attempt to make them more sympathetic. The characters are all products of their times, which makes just abotu all of them rather problematic, but the book is open and honest about it. Winstron Churchill did some truly terrible things, and had some monstrous opinions, and while he’s on the side of “good” in the story, his flaws are on full display. As are Lucy’s, for that matter, and her loyalty to an empire that has committed atrocities and continues to view the world in terms of what it can take, uplift, or destroy. So I like that the characters question each other, call each other out a bit, even as all of them feel authentic to the stories they come out of, to the time that birthed them. Not that it excuses them, but it does leave it to the reader to contextualize the characters and their actions and beliefs.

The story also takes the relationship between Lucy and Clarimal into some new directions. Or, well, maybe technically into an old direction, but one that’s been there in the background the entire time, simmering. Namely, the story looks at religion, something that played a huge role in the stories surrounding monsters, and something that Lucy is very aware of as a vampire slayer and a dhampir. The piece complicates some the idea that Clarimal doesn’t have a soul and that Clarimal is tainting Lucy somehow, which could lead to Lucy not being able to get into heaven. And I like how the story handles this fear, this idea that Clarimal is destined for Hell. Even as that looms large, though, the religious symbols that have always been effective against monsters are starting to lose some of their potency. And I can’t help but think it’s because more people are realizing how unfair and loaded religion is, how tied to the horrors of war and suffering. It gets people to question the comfort of religion in the face of injustice and starvation and war. And as the characters go back and forth, trying to protect each other from damnation, there’s slow realization that they don’t have to be defined by the rules they’ve been taught. That their faith can be personal, that their souls aren’t necessarily forever tainted because of their love, because of the trauma they’ve survived. It’s not a journey that is wholly concluded by the book’s end, really, but their relationship does get a chance to have hope. A hope that it will not be crushed by the societal pressures that demanded queer love disqualify a person from salvation. Plus, it leaves more room for another sequel! :)

Overall, the book takes all the elements of the first installment and builds on it. The action is more visceral, the cast larger, the stakes much higher. There are sapient dinosaurs, vampire vs. wolfman fights, and a particularly evil German scientist who just won’t seem to die. Plus there are moments where the characters must confront their missions and the legacies of their nations. It’s a fast-paced, daring adventure that is all kinds of Extra, and it’s a wonderful read. Definitely check this one out!

Posted by Charles Payseur at 4:38 AM