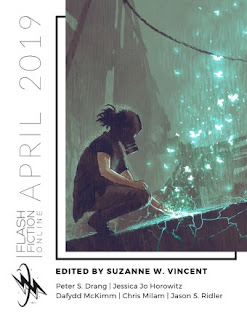 There’s aren’t any fools in April’s Flash Fiction Online, just three stories touched by grief and loss, defiance and denial and the need for something to change. In some of the story, the pressure comes in the form of another person, though that might be an abuser or a lover. For others, it might be a situation, a constant droning noise that won’t stop. But each of the characters loses something. Their freedom, their expression, their love. Even as they reach for something else, something they can’t quite name but for the want of it. And they reach, and reach, and the stories detail how they might finally take control of their futures, or fall victim to them. To the reviews!

No Spoilers: The Lady is a prisoner, far removed from the Ganymede that she grew up on, the Ganymede devastated by a war that cost her family everything, which ended up landing the Lady on Io, with a Duke trying to pretend at nobility but really indulging in his cruelties. The piece is intensely dark, the plight of the Lady that of being caged, used, unable to really fight back or escape because of the level of power the Duke has over her. And she’s left hoping for a release that really cannot come, because of who and what she is, finally coming to terms with stepping into a different role than the ones laid out in stories and myths.
Keywords: CW- Slavery, CW- Rape, Imprisonment, Transformations, Confessions, Birds
Review: I like how the story captures a very fairy tale like feel, mirrored in the stories that the Lady herself heard and holds to, of a woman whispering her plight to a bird who carries word away to bring rescue. In these stories, the woman’s ingenuity is in how she can get word out to a man to come and save her. She cannot really fight back against her captor herself, in this case because he’s put her in an incredibly fragile body that literally shatters when she moves too quickly. But nor can she really expect rescue, because she’s just a copy of a person, the neural pattern of a desperate woman and therefore it seems without rights, especially when held by a wealthy and cruel man. So she knows that no one is coming to her aid, despite how desperate she is for that. Despite how much it hurts to try to do anything to resist the Duke. She wants to believe in the fairy tale promise of release, but at the same time knows it is a trap to keep her still and obedient. So instead she takes a different lesson from the sparrow, and works for her own freedom. Not in the form she might have preferred, but free at least from the terror and abuse of her situation, able to fly far away and out of reach of the Duke. It’s a difficult read, chilling in many ways, but also freeing, showing a victory of sorts, if only of this Lady deciding that she’s going to define her own escape rather than waiting for a man to come and author it. A fine read!

No Spoilers: Gator is a musician and had some success up to nine years ago, when an asteroid or something similar fell into sync with Earth and started to interfere with people in the form of a buzz in everyone’s head that makes hearing other noises virtually impossible. Which means that Gator has been out of work for nine years, scrounging what he can but still practicing his craft, his saxophone. He holds to the hope that the buzz will stop, that all of his practice will be for something, and as the story moves he finds he might have reason to hope for different reasons as well, or to despair everything. It’s a piece balanced on the frayed edge of pain, of having to endure a world without sound beyond a constant grated drone, and it walks the line gracefully.
Keywords: Music, Noise, Loss, Performance, Hope
Review: I like how this story really gets through the feeling of having a noise that overpowers everything else. How so many are so broken about it, on edge, upset and angry because they are in pain and they can’t enjoy things like they once did. They can’t listen to music, can’t watch things the same way, can’t experience the world with the same ease once there is that buzz, because it has a way of sounding over everything. And for Gator, whose art and expression were tied to sound, it’s especially devastating, He holds to hope that the buzz will stop even as everyone around him adapts and tries to make what they can out of the situation. Which is both interesting and heartbreaking. Because it seems so real, this loss that he feels, this wound that has been opened up that he thinks can only close if things go back to the way they were. Only some things there is no coming back from. Some things you can only go forward through, even if it kinda sucks. And he sees people still making music of a sort, and is in some ways inspired by it only to find that he’s still stuck thinking about music as it was, and this new situation requires a different way of thinking about it. Not a spell to dispel the buzz but a way to bring some relief inside it. Which makes his journey a rather tragic one, because he doesn’t seem able to really adapt to what’s happened. And holding onto the music as it was, thinking that things will go back, is a form of denial, a way he’s holding himself back from the rest of the world, from moving on and beginning to live again. it’s a dark idea that the story circles around, and it makes for a wrenching experience because a part of me wants to root for him and his hope even as I know it’s not what he or anyone else needs. He needs a plan for moving forward, a way of trying to do what good he can in the new status quo. And it makes for a great read!

No Spoilers: Lena speaks in birds. Literal birds that fall from her mouth as she speaks and fly away. Eva is the narrator of the story, though, and dating Lena in a relationship that seems fragile but beautiful, full of passion and love and fire that burns hot. For both of them it’s something that they want, something they might need, but for Lena at least it might not be all of what she needs, and as the seasons turn something begins to pull at her. The piece is bittersweet, revealing this wonderful relationship that is beautiful and kind and strong but also marked by a sense of running out of time. And it makes for an experience of not wanting to let go, of not wanting for something to end even as it becomes clear there’s no avoiding it.
Keywords: Birds, Relationships, Queer MC, Migration, Rebirth
Review: Speaking in birds is such a strange image, almost haunting but not without something compelling, wondrous. Lena is a woman who is flighty, shy, and possessing an internal drive that Eva picks up on, revels in. They love each other not easily but with a need that seems to surprise them both, as if they know ahead of time that what they have isn’t going to last and both are angry about it. And yet it makes them happy for as long as it lasts, until it comes time that they know what’s right but can’t seem to act on it. Because it means saying goodbye, means going their separate ways, and neither really wants to do it. Eva wants to make it hard, wants to belief that Lena doesn’t have to go, while at the same time Lena doesn’t seem to want to either but knows she does and must resent Eva just a bit for making it seem like this is something she wants and not something she’s compelled to do. That she can’t fight against her nature, against the relentless pull taking her away, migrating with the rest of the birds to warmer climates. And really that reads real to me, the two people in some ways trapped wanting their relationship to be enough, knowing that it’s not. It makes for a rather heartbreaking situation, one that begins to sour them to each other, that leads to the moment of grief and loss that Eva has when she wakes up to find Lena gone, where she mourns for the relationship she had and lost. But also I think relief, for the freedom that Lena now has, for the closure that it brings, the only closure she really expected. And it allows them now to move forward, treasuring what they had but knowing it’s not the end. A wonderful story!

Posted by Charles Payseur at 4:55 AM