I’m closing out my look of Glittership’s Autumn 2017/Winter 2018 issue today with reviews of an original story, two reprints, and an original poem. And…and I think for these stories there’s a general weirdness that pervades. They’re queer not only in the identities of the characters involved, but in the way they bend genres and expectations. From a vampire dating story to gay space cowboys and beyond, the pieces have a way of being original and very memorable. They also carry with them some heavy darkness. From loss, from fear, from the various systems that have let the characters down, and that they are determined to fight back against. And ultimately the stories mix tragedy and hope, survival and joy, and make for a great way to close out what has been a great issue for the publication. To the reviews! 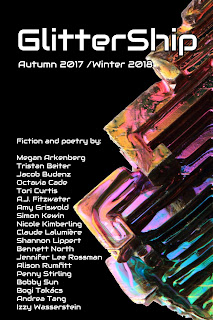 “You Inside Me” by Tori Curtis ( words)

No Spoilers: Sabella is a vampire dying from a failing liver after complications from surgery. The piece opens as she sets up a profile on a vampire dating site and meets someone. Someone who might be her only hope of survival, if she’s willing to donate Sabella half of her liver. The piece moves quickly into Sabella and Ais’s relationship, the two of them dating even as Sabella asks if Ais would be willing to go through a risky surgery in the hopes of saving Sabella’s life. The world building is intricate and interesting, the nature of vampires here not hidden or all that mysterious, though there are things that still aren’t well known about vampire medical care. Despite her deteriorating condition, though, Sabella is resolved to live, and though formed quickly and partly around this need to live, her relationship with Ais is tender, affirming, and powerful. There’s plenty of darkness to the piece, too, a sort of background noise of pain and hardship pushing either towards tragedy or healing. But ultimately I think the piece is about compassion and hope, about going through something terrifying in order to live. And it’s fun, told with an easy flow and guarded voice that makes for a very compelling read.
Keywords: Vampires, Trans Woman MC, Surgery, Dating, Illness
Review: The relationship between Ais and Sabella is such a beautifully messy thing in this story. Because it forms and almost immediately Ais, who is commitment-averse, is asked to save Sabella’s life. Or, not asked exactly. But everything is put out on the table. And it’s so hard not to feel for Sabella, for her situation, to not want to give her something good, some hope that she’ll go on living. It’s such a weird thing because while things might have played out differently had Sabella not been sick, she was sick and it becomes this very central thing in their relationship. And I love that Ais is never coerced into anything. Indeed, as her and Sabella grow closer it’s often Sabella who thinks Ais might be taking too many risks, even if they end up saving her life. It’s this situation where Ais at every moment could walk away, but that it might kill Sabella. And that’s such a heavy thing in their relationship, in the story. And it doesn’t make anything about reading this piece easy. It takes up space. It complicates everything. But it feels so real. And it shines so much brighter because Ais and Sabella do seem to care about each other so much. That Ais is willing to do this because Sabella didn’t try to manipulate her into it, and always cared about Ais’ decisions. That the result is something terrifying and difficult but also beautiful and brave and strong and ahh, I just have feels from this story, okay? Go read it. Go read it because I’m not sure I can do it justice. It’s a wonderful story!

“Oh, Give Me a Home” by Nicole Kimberling ( words)

No Spoilers: Gordon and Henry are terraformers overseeing a large herd of MSTIs, creatures designed to make New Saturn (and other planets) habitable for human life through their organic functions. Gordon, born and raised in space and needing a sort of exoskeleton to move around in terrestrial gravity, is musical and a bit of a romantic, while Henry is more machine focused—together, though, they make an adorable couple, and are doing their best to get New Saturn ready for human settlers. When one of the MSTIs decides to go where it isn’t supposed to, though, the two men find that their quiet life might be due for some loud complications. Sweet, hopeful, and rather hot, the story focuses on the relationship between Gordon and Henry while revealing the stakes of what they’re doing and showing the rewards of their quirky way of doing things.
Keywords: Terraforming, Music, Queer MC, Western, Herds
Review: This is a super cute story, and I love how so much of it comes down to the importance of love and respect in all things. Gordon and Henry could be making more money for different corporations, but feel that their way—slow and labor intensive though it is—gives them the most respect not just for the work, but also for each other and for the MSTIs that do so much of the labor. Gordon’s rather sappy way of engaging with his job, the romance of herding, of getting the land ready for human settlements, means that he cares about the MSTIs as individuals, as valuable. He’s not moving in just numbers or profits, but rather looking at the very human level of terraforming, the sweat and the effort and the relationships that are forged. That make the work easier but also make the work better because it is more personal and because together they can all work as a team, as a collective. And it’s just a really great way of contrasting with the profit-driven, exploitative model of doing things, that come to call in the form of a pissed off ex bent on revenge. What saves the day, though, is Gordon’s respect and care for the MSTIs, and his dedication to them and to Henry. It’s a triumphant piece, and it’s definitely worth checking out!

“In the City of Kites and Crows” by Megan Arkenberg ( words)

No Spoilers: Hythloday is a person connected at multiple points to anti-government movements. Projects to expose what has been covered up or censored. And yet they aren’t exactly a part of those movements themself. Instead, it’s their lovers who are all involved, and their lovers who seem to be in trouble now that a new project has brought the attention of an oppressive and authoritarian regime. The piece shows Hythloday move from lover to lover, trying in their own way to be a part of something while always feeling on the outside, just moving through. It’s not an easy story, full as it is of the markings and scars of police abuses and authoritarian fear. People are hurt, and people die, and the story doesn’t hide or soften the blows of that. It’s a piece that confronts the reader and Hythloday with absences and with the growing evidence that something is wrong, something is breaking, something is burning, and asking what is to be done about it.
Keywords: Fire, Resistance, Queer MC, CW- Police Brutality, CW- Suicide
Review: Fuck this is a beautiful story, full of sex and longing and guilt and hope. And Hythloday is a complicated character, one who lives in a city known of its burnings and who in turn has developed a way of not getting burned. Who is always on the move so as not to be caught. Who avoids the places and the movements that seem set to consume them. And yet at the same time they are drawn to the warmth of the fires, to the people who are on the front lines of the struggle against corruption and against injustice. And in many ways too they are haunted. Haunted by the people they have been with, who they have cared about, and who have been burned by the system that keeps right on moving forward. For me, the story is about the very complex space where resistance happens, where risk happens, where Hythloday fears that they are always too late because they survive, because they live, because they pass close to so many people who do not, who are consumed, who die. And for me the story has this uncertain quality to it, about time, about where Hythloday is left, alone, haunted, hoping for a justice that they don’t quite know how to work toward because everyone that might have guided them is gone. It’s a heartbreaking and rending piece and after reading everything hurts. But I also think it’s a call to act, to act before things get too bad, before you look around and find you’re the only one left. And really, just go out and read this one, it’s fantastic!

“Dionysus in London” by Tristan Beiter

Um. Okay, so to me this is a weird and vaguely opaque poem, one that flourishes on its use of the absurd, of flowing idea to idea without really stopping and building up this view of London, of people, of nature and city melding and repelling. The piece has a cast of characters, but the most prominent two are the narrator and a woman, who are caught in this moment of asking and being asked a question. Or giving and receiving a request. And from the strangeness of the request, the poem moves a bit like a challenge and the meeting of a challenge. That the piece is answering in some ways that original desire by the woman with the big hair, who returns again and again as the narrator slowly but surely loops around to a traffic sign becoming a flower. I will admit that this poem escapes me in large part. It’s evocative and weird, and yet it resists my efforts to find a literal meaning to ir. It’s quite possible that I’m missing some key context in order to “get it,” but it’s also possible that the poem is more a cipher, a collection of images and feelings that builds together, mixing nature and city, flowers and bathrooms, a beautiful mess, which maybe is what a place like London is. In any event, it’s certainly worth spending some time with. Go check it out.