LIVER BEWARE! You're in for a Drunk Review of Goosebumps #2: STAY OUT OF THE BASEMENT 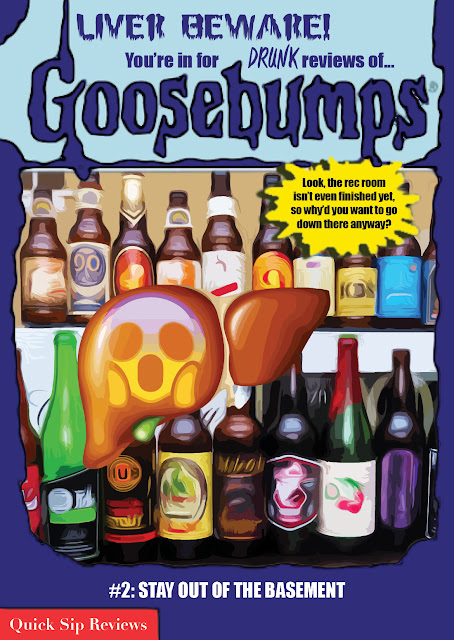 And we're back with more Goosebumps, more reviewing, and MOAR DRINKING! The second book of this...uh...celebrated series is, of course, the classic Stay Out of the Basement. Which, FYI, if you have Netflix you can both read the book and WATCH THE SHOW. Because yes, 90s television was great. I have to say, the show doesn't really do complete justice to the book in terms of the creepiness of some of this, but it does a decent job of adapting the story. It's a two-part show for no reason whatever because really it's not that complex but you get a few nice moments. Less shirtlessness, though. Seriously, there is a lot of shirtlessness in the book, and the show fails to live up to expectations with that. Boo. Oh, and I started the day drinking Leinenkugels' new-ish Bavarian Dunkel but have since moved on to New Belgium's Chocolate Chip Cookie Dough Ale. Because I'm classy!

So where to begin with this book. Once again we have a sister and brother, Margaret and Casey, as the primary characters. Once again the sister, a year older, is much more prominent and competent, though rubbish at science. For that she has a nerdier friend, Diane, who shows up a few times but is really only there to break the family taboos and lead Margaret into temptation. And by that, of course, I mean that it's Diane who prompts Margaret to explore the most forbidden of basements. But perhaps I'm getting ahead of myself here. First the book makes sure that we're aware of a few things.

1. Dr. Brewer was totally fired from his teaching job at a university for some ethics violations with regards to his plants.

2. He has since converted the basement into a new...lab, and he scares everyone who attempts to violate his sanctum with his titular catchphrase "Stay out of the basement!" Terrifying.

3. Everyone has noticed some...changes in Dr. Brewer since his new experiments.

4. The family apparently has no concerns about money despite their suburban living accommodations, out-of-work father who shows no interest in getting a job, and stay-at-home mom who seems more annoyed that her husband is home all the time disrupting her routine than that the family has zero income. I'm guessing she's on some heavy tranquilizers to maintain the level of calm she displaces throughout the book, which includes having to leave the house to go care for her sister, who is on the brink of death apparently.

Anyway, the book basically sells itself on the scare-factor from a central premise: toxic masculinity. Wait a second, you say, what the fuck—Goosebumps is not exactly a deep or nuanced examination of gender roles. And right you are. But really, the story builds up its horror not really from the uncertainty of what's growing in the basement, but from the uncertainty that Dr. Brewer won't outright murder his kids. The book is essentially about the monstrosity of a dude who has found that his one role, as breadwinner and provider, is taken away and it leads him into a spiral of desperation, violence, and plant-based sexual deviancy. It's not like the signs of a problem aren't there. He's acting different. He treats everyone around him like shit. But everyone excuses his behavior. EVERYONE. In their quest to make sure that he doesn't feel like a failure they turn a blind eye to the abuse spiral they're witnessing. To the point where they CAN'T ACTUALLY TELL WHETHER OR NOT HE'S AN EVIL PLANT BENT ON WORLD DOMINATION.

Sure, it starts out innocently enough and he's just yelling at people to stay out of the basement. But then he's accusing everyone of spying on him, preventing his children from talking to their mother, putting new locks up for everyone's "protection," maybe-trying to poison the kids, and straight up probably-murdering some guy. Margaret and Casey are witness to growing signs that their father is engaged in outright criminal activity and still everyone wants to cut Dr. Brewer a break because he's "very stressed right now" and "it can't be easy." They want to believe that their father is, at his core, a decent person. That he loves them. But the truth that becomes more and more evident is that he doesn't give two shits about them and would much rather recklessly endanger them than deal with the fact that he's a terrible scientist and kind of a failure. He asserts his masculine need to be right, to be smart, to be "the man" and in so doing threatens everyone, even himself.

Oh, and plant sex. Or plant...rape? I'm pretty sure that it starts as one and then spirals into the other. Remember that unethical behavior he was fired for. Well...

"I'm trying to build a plant that's part animal."
Casey and Margaret stared at their father in surprise. Margaret was the first to speak. "You mean you're taking cells from an animal and putting them into a plant?"
He nodded. "I really don't want to say more. You two understand why this must be kept secret."

Sound the alarm bells, because he's fucking those plants. Which is fine. I do not pass judgment on people who use plants as a masturbatory aid or to enhance their sexual enjoyment. But that's obviously not enough for Dr. Brewer. No, emasculated by his firing, he is obsessed with creating sentient plant creatures for to visit his lusts upon and that is not cool. At all. He creates an entire room of plant-abominations that are in constant pain and only thinks to push forward, forward, until he creates a fully-realized plant man who looks exactly like him and who wants to, in turn, tie him up, stuff him in a closet, and...well, that part is never quite discussed. Luckily, Margaret and Casey arrive in time to free their captive father so that he can...threaten them with an axe? They are actually saved by the arrival of plant-dad, at which point the two possible Dr. Brewers try to convince Margaret that they are the real one when really WHAT THE FUCK DOES IT MATTER? Even if one of them is more "human," he's still guilty of creating and torturing plant-people for his own sick amusement and even if he was replaced it was only for a few days which means that most of the sketchy shit that's been done was still the human Dr. Brewer.

And...and that's what I'm saying. The book offers the easy out. The plant is revealed (and slain) and the human Dr. Brewer gets his job back and everything goes back to normal. His behavior leading up to that? Well, he "got carried away." That's it. The truth? Both men at the end were the "real" Dr. Brewer. And both should have been axed. The real monster was toxic masculinity all along that excused his actions as "just being a man haha you know how they get caught up in their work" and that monster is still very much alive at the close of the book. Which just brings us to the twist which is that Margaret starts hearing every plant in the yard start claiming to be her father, in a chilling reminder that the choice was always loaded, always false, and that she's still very much living with someone who would sooner kill her than face having to be a decent person and father. Hurray!

And okay, maybe that's a bit dark. The good news is that I'm pretty sure that Margaret goes off to college to be roommates with Diane and they end up running away together. Diane is super into math and gets into aeronautical engineering and Margaret becomes a painter of really disturbing murals that may or may not also predict the future. When she realizes that her latest piece show an army of plant-people with her father at its head, she and Diane have to track down Casey and together the three of them and a tanker truck full of weed killer are all that stands between humanity and the plantmageddon. It's brain rather than brawn that save the day, though, when Diane manages to convince the plant-queen to turn on Dr. Brewer and accept a one-way trip to Mars, which will become known as the Green Planet once the plant-people properly terraform it.

All right, that was another kinda-lame book. It wasn't all bad, but it was another slow piece that really didn't get outside a boring suburban home. Time break it down WITH NUMBERS.

On the "Would I write fanfiction scale of greatness": 4/5 (for being rather boring the fanfiction here writes itself. And not even the admittedly-awesome Margaret/Diane stuff. I'm talking, of course, about Dr. Brewer/Plant Dr. Brewer. They both think they're the real Brewer, so how are they going to prove which one's the human and which the plant imposter? I'm not quite sure but I do know that it wouldn't carry a TV-G rating)

On the "Is this actually good scale of more trying to be objective": 1/5 (this is still rather awful. Again, I'm glad I didn't start the series at the beginning, because these first two have been terrible)

On the "Yeah but this is Goosebumps scale of relative wonderment": 2/5 (I'd still say below average for the series and quite similar to Welcome to Dead House in many ways. The replicant trope is a horror staple, but there's really not a lot of horror here because we never learn what the plant wants? To turn the kids into plants? It also plays with the fear of a parent who has power over you, but that wasn't as much explored. For the series it's just a bit too boring to stand out)