Okay, so I’m a little behind in my novella reading, but I’m making a start of things with this, the second of the Book Smugglers Novella Initiative releases. It’s a story that revolves around hair and community, injustice and identity. Hair is something that is not politically neutral, after all, carrying with it a slew of expectations, prejudices, and exploitations. And, of course, these pressures and pitfalls fall along racial, gender, and social lines, explored in this novella to sharp and shocking effect. As a bald white guy, it’s something that both is hard to understand as well as incredibly easy to see. After all, if someone started poisoning hair products aimed at white men like me, desperate to retain or regrow hair, the reaction, I imagine, would be immediate and intense. But of course, likely things would never have gotten that far. Testing and science already favor white cis men as research subjects, skewing most data about health risks, and that’s not even mentioning what happens when corruption and systemic racism mix to fail to regulate products and services aimed at people of color. So yeah, sorry, I really should just get to this review! 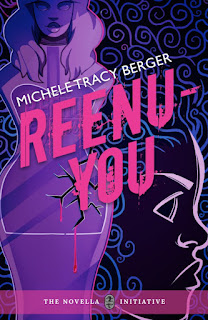 Braiding together the stories of five women united by more than just their choice of hair relaxer, the story is built around the perspectives of two women, Kat and Constancia, while bringing in documents and sources from the broader situation as it develops, revealing a crisis that seems far too aimed and far too devastating to be merely a series of unfortunate events. The novella spends most of its time with Kat, a black woman in her mid-twenties, an out-of-work ski instructor returning to New York from Aspen to wrap up some things following her mother’s death. Her relationship to the city, and to her mother, are complicated, and strained, and mostly she just wants to get it done so she can move away again. While in the city, though, she tries a new hair relaxer, Reenu-You, and develops a rash that brings her first to the doctor, then the CDC, and through those into the presence of four other women suffering from similar symptoms.

Meanwhile Constancia is younger, living a very different sort of life, more at risk and more quick to action. Her manners (or perceived lack of them) put her at odds with Kat, who's much more concerned with respectability, and yet as the story moves the two come to understand each other better, seeing the walls keeping them apart have been built by a racist society. The story also works in texts from the company behind Reenu-You, and it creates this damning picture of the country that could allow this all the happen.

The story weaves these characters together, showing how they form a group, how they look out for each other and start to form a bond despite their large differences. They each are at different places in their lives, from different backgrounds, all pursuing different paths. And yet they all have similar experiences, and in many ways they are all equally expendable in a system that treats their pain as suspect, their lived experience as baseless complaining. The story shows just how the characters are treated, all doing exactly what they are supposed to do, all following the rules and trying to use the system that’s supposed to protect them, that’s supposed to protect everyone. And yet because they aren’t trusted, because they “must be overreacting” about what’s happening, they have to depend on each other for support and care, banding together in order to try and make sense of what is happening to them. It’s a chance in some ways to connect and share their stories, to come together as people who aren’t otherwise listened to, who have to live with being suspect. And that’s not something they can entirely escape, either, the group fracturing at times along different lines, none of them completely comfortable with each other in part because of the prejudices they’ve had to internalize, because of the way they’ve been conditioned to see themselves. The story explores the ways they hurt and distrust each other but also leaves room for that to give way to some deeper understanding and sense of togetherness. By sticking together they are able to do something about their situation, even if it is only to give themselves the distance and dignity to not be murdered by a government much more afraid of them than it is concerned for their well being.

And I love the way the story builds up this situation, the mystery of it. For me, the question at the heart of the story is “was this deliberate?” Was what happens in the story a purposeful targeting of black women in order to kill them? Is there going to be proof that this company was, gasp!, evil?![SPOILERS] It’s not a question that the text of the story answers, exactly, and yet to me the question itself loses a lot of its relevance as the story progresses. To me, the story shows how little it matters if there is proof or not, if there is some stated racism at the heart of this or not, because whatever the case, yes, it was deliberate, and yes, it was racist. The result comes about because people were okay letting black women die. Because they didn’t want to make a product that worked, that wasn’t harmful. Even if it was “just” an “honest mistake,” it wasn’t. Because trying to prove some sort of secret intent is a losing game. It’s how the system continues to be so broken, because we ask for this burden of proof to show that a landlord meant to target black people through their policies. Or that a piece of legislation meant to target black people to take away their ability to vote. Or that a company meant to put black lives at risk through their willful ignorance of their own product. The answer, for me, is it doesn’t matter what proof exists about their intentions, because the root is still the same. The root is that it happened and it happened because the standards which are demanded for products that would be used by white men are not those followed for products aimed at black women. The racist intent remains, even if it cannot be proven, and what should be taken into consideration is what happened. What the outcome is. Who is disproportionately effected. And the outcome here looks an awful lot like genetic cleansing and genocide.

And wow, yeah, given that it’s safe to say that the story is a deep and complex and wrenching experience. It has moments of connection and joy but they are mixed with much heavier and more unsettling moments where the characters must deal with a system designed to not help them. To not protect them. And the result is a sort of apocalyptic story that captures the loss and sorrow and pain of what’s happening, focusing in on this one group of women, creating an atmosphere that is at turns intimate and claustrophobic, warm and terrifying. It’s a tightly knit, slow-boil of a novella, and you should definitely give it a read. A fantastic story!