LIVER BEWARE! You're in for a Drunk Review of Goosebumps #4: SAY CHEESE AND DIE

[Hi all! Here's a new FREE installment of my ongoing Liver Beware! series of drunk Goosebumps reviews. At first I thought I would do all the odd-numbered reviews, but I think I might just skip around a bit, which means that this isn't review #3 but rather #4. If you enjoy this series or indeed anything that I do at Quick Sip Reviews, become a Patron and you can get access to all the Liver Beware! reviews plus other extras. Anyway, to the review!] 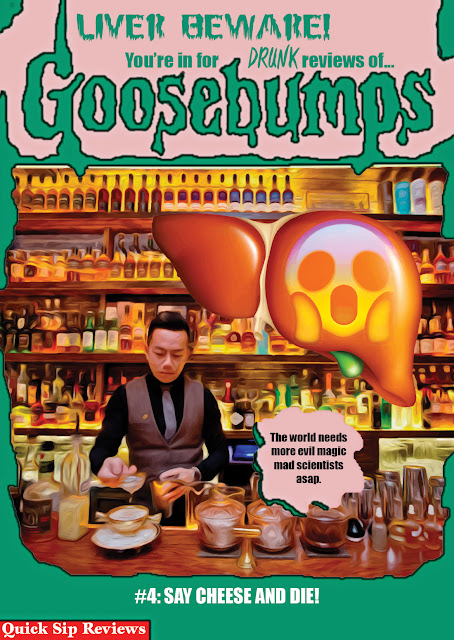 Hello and welcome back to another thrilling installment of my gradual decline into the sea of booze and bad chapter books! A note before we begin that I'm drinking from a Summit Brewing IPA pack. Or...a mostly-IPA pack because the first thing I'm drinking is an India Style Black Ale and it is...weird. Rather bitter and almost spicy and just...not what I'm used to in Black Ales. But I will say that it fits this book, which is...well, which features probably the strangest villain so far in Goosebumps and seriously the most idiotic main characters. So let's get it started!

Okay, so I say that the main characters here...aren't too bright, and I fully stand behind that statement, but we do get the most primary characters in any Goosebumps book so far. In good 90s tradition, they are as follows: scrawny kid, fat kid, main character, girl. Or, if we must name them, Bird, Michael, Greg, and Shari. And this book reminds us both that kids used to be able to just roam the countryside looking for adventure and that STRANGER DANGER IS REAL OMG LOCK THOSE CHILDREN UP! Because as the book opens the four friends are sitting around with nothing to do and so decide to trespass into an abandoned building where a homeless person (nicknamed Spider) seems to be squatting. And hey, we've all been there. In Middle America this is a legit thing to do.
So yeah, this book also does a lovely job of showing just how annoying people were around cameras when they weren't standard on every piece of electronics. I mean, these days we have selfies and infinite storage (essentially) and we can take a picture with our phones, so seeing a camera is just sort of standard operating procedure. In the rough and rowdy 90s, however? Wave a Polaroid around and people would COME RUNNING and immediately try to look cool/sophisticated/funny/what have you. This book reminds us all of those times. Also, THE FASHION. Let me find what Shari wears in this book...

Posted by Charles Payseur at 6:16 AM