Where last month’s Flash Fiction Online was all about scares and horror, this month turns things around quite sharply, offering up three original stories that are weird, fun, and full of whimsy. WHIMSY I SAY! These are stories that explode with charm and cuteness, with worlds that are bent in strange ways. Discarded clothes that want to be adopted into new homes, luck that runs bad or good according to a set formula, and beauty pageants where the contestants are all plants—the premises are refreshingly and a bit ridiculously speculative, and offer an invigorating breath of levity into the mix. So without further delay, let’s get to the reviews! 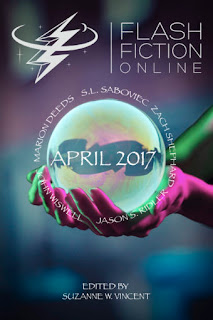 This is a cute story about confidence and competence and fashion. It’s also a story about compassion and for reuse. The world is built with a neat twist from our own, that discarded clothing acts a bit like discarded pets, mobile and begging to be adopted or else roaming the streets in packs. It’s actually kind of terrifying if taken to its logical conclusion, but the story (thankfully) does not and instead we get the story of a woman who isn’t looking to adopt a pair of shoes. She knows what she wants, or rather she knows how she wants to be perceived, and there’s room in that image for a pair of ancient shoes. And if the story had decided that she was stupid for worrying about her appearance, or anything like that, I wouldn’t like it as much as I do. Instead, the story challenges the attitudes behind her hesitation to adopt the shoes, her fear that she won’t be taken seriously based on her wardrobe. It’s a real fear, and people (especially women) are judged all the time based on what they wear and how they look. The story recognizes that but also that sometimes what’s more important is how something is worn. It’s about the feeling that it gives the wearer. It’s about the extra confidence that comes from being comfortable and in control of how you can dress. And the story shows this character in command of herself and willing to take a chance, and it pays off for her. Now, I mean, it’s not the most risky of choices as the shoes reinforce her femininity so she’s not really stepping outside of gender expectations but the story is more about that she’s making this decision for her and taking power for her, not because it’s expected but because it reflects who she is, and I rather like that. So yes, a fine, fun, and fantastic read!

This is another exceedingly cute story about experiments into the nature and quantifiable existence of good and bad luck. The main character is a man working to establish not just that luck and lucky items are real, but just how much luck, good or bad, each item possesses. Is a rabbit’s foot luckier than walking under a ladder is unlucky? The story is framed as this man going out his experiments and chronicling them. It’s not exactly the most methodical of procedures, as the zany mishaps the man goes through lack scientific rigor, but it does show that he’s a bit of a glutton for punishment. The story is chucklingly funny, and provides a lot of implied slapstick as the main character goes in and out of the hospital with cartoonish regularity. And if that was all it was, it would be charming and light and rather refreshing, but I like that it goes just a little bit further, making things go really weird as the man ends up messing with luck a bit too much. The outlandishness of the story is perhaps the largest draw for me. I have a tendency to resist stories that feature main characters, and especially “stupid men” main characters, who manage to just waffle their way through the world and stumble across these great insights and powers, but this story really doesn’t go to great lengths to show that he’s “right” in the end. Even after everything he’s no closer to unlocking the secrets of luck, and because the story doesn’t try to assure me that he’s actually a good guy and his heart’s in the right place I found that I could just enjoy the wild ride the piece took me on. Another fun story!

Revealing a world populated by mobile, sentient plants, this story shows the shady side of beauty pageants and competition but with a fun and rather dark twist. The piece features Iiliia, a plant very obsessed with winning the Victory Vine at a prominent show. Along with them is Yuuna, their rival, and yet the story does a great job of showing how rivalry can be so close to friendship, the two plants on the same side expressly because they both understand each other and that if one of them has to lose, it will be to the other, and not some upstart. What follows is a rather dark story, though, once you dig down a bit, because it’s about two plants working together to sabotage an opponent, showing no mercy as they tear down the other plant competing against them. What they don’t quite count on is that the dishonesty can cut both ways and they are in turn offered a sort of choice—lose or face something worse. It’s the world of the story here that is charming, that builds up the sights and sounds and smells of the characters. The pageantry, the competition, is fun and invites the reader to become an observer, to watch as these plants show what they can do. But in doing so, we also become complicit in what follows. In being so concerned with beauty, we don’t realize how ugly things are behind the scenes. And what the story does a nice how showing is how these kinds of competitions are not about the art or the beauty, they’re about the game. It’s more bloodsport than anything, and it creates players who are devious and can spin even something that seems like a defeat into gold, into opportunity. It’s a story that seems sweet even as it might be laced with something deadly. And it’s a great way to close out the original fiction of the issue!