So I technically have a new story out in the Another Dimension anthology that released mid-October and I've been trying to figure out what to say about it. The story represents the strangest and most depressing journey I've had with a story/publication and while I still kinda like it, the story itself was written back in late 2012/early 2013 and that's…a long time ago for a publication that released late 2016. I've written about this experience a few times, really, but I'll give a bit of a recap. 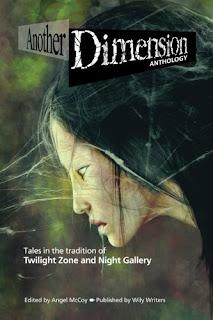 The story was accepted by Wily Writers (which did audio and text stories) in June 2013. Contract sighed, announced to friends/family. And then…silence. Querying didn't get responses. I watched the site as it put out less…and less… Until finally in mid 2014 it stopped putting out anything. The contract was only good for 1 year and all rights reverted back to me in June 2015. Now, this would have been my third sale ever. And it paid 5c/word. So it would have been rather huge for me. I was excited. I thought, this is me breaking in. And…well, it was rather crushing to have that all fall apart. But I kept going, kept writing. By Late 2014 I was sending the story out again. Then, in early 2015 I was contacted by the publication, which was trying to re-launch as Another Dimension. They still wanted the story, happily, and offered me a new contract with the same terms. This time I was paid. I did edits. I waited.

The Kickstarter for Another Dimension failed, but the editor decided instead of giving up to release what would have been a regular publication as a one-time anthology. An indiegogo was organized and that funded. The project went forward (this was mid 2015). Originally the antho was supposed to release late 2015, but this was pushed back to early 2016 so the stories would have more time for awards consideration. Then that became September 2016 because…delays? And then that became October 15, 2016, because ??? The important thing is that it's out now. The story is kinda cute and kinda depressing and about a female psychic called out to investigate a sunken wreck in the Atlantic following a rather traumatic case she just dealt with. She's sidled with a federal agent who's kind of an asshole and kind of hiding a lot of information from her which is pretty stupid because, well, psychic. And there's a bowl of really disgusting mac and cheese and that I'm still rather proud of. But this is a story from a long time ago and I'm not really sure it represents my style or my best output. Still, I'm glad that it's mostly all done now (awaiting contributor copy at the moment, so maybe I can see what else was included in the collection).

Sadly, this isn't my only experience in SFF dealing with contracts being broken or publications collapsing. I'm sure many many people deal with it, because especially for beginning writers it's a game of trying to get out there and trying to get paid, and I've sent things to some weird publications. This year I had a story at Plasma Frequency, that had just recovered from being knocked out of the field only for them to fold again before they put out the full issue with my story in it. Which would have been nice to have, but so it goes. I got paid for it, at least. Part of this is that maybe I could have done something more, being under contract and all, but that I'm rather no one in the field and I can't afford to pursue anything. For all of these I wasn't even in the SFWA to have access to those resources. Again, I don't think this is uncommon. But it does suck.

The more I write the more I see that there's no such thing as security in the field. It's a constant struggle, a constant competition, and at times it's something that grinds up writers and spits out cynical, jaded people. There are other places where I'm still waiting and hoping to get paid, where the publication is struggling and will hopefully not close. Where the work is out and making money. Where I should be paid. Where I'm waiting because I'm betting that the pub can rebound and manage to pay its outstanding balances. Shit happens. Yes, I could really use that money. But my other recourse is to…well, that's sort of the thing. These are not big publishers. They are small, they are vulnerable. They put out content that I feel is important. They have my support, and my hope. I don't feel taken advantage of. I feel sad, and tired, and a bit disheartened. But I do believe that most places want only to put out great stories and pay the people involved. At least in the situations that I've been a part of.

This has gotten a little far afield. "What Dora Saw" is out now. It's rather fun, I hope, and rather interesting. I think that it builds up one thing and then offers something of a twist. I hope. Plus that bowl of mac and cheese. I still cringe and chuckle. Anyway, thanks for reading!