The second issue of Orthogonal SF is out and this time it's focusing on the theme of codes. Not necessarily in the traditional sense of puzzles and ciphers, though. Instead, these stories seem to rely more on language as code. As sensation as code. About interpreting what is foreign, what is alien, and trying to make sense of it while realizing that our lives are codes, are narratives, and how we shape those narratives shapes just not our perception of the universe but the actual shape of the universe as well. These stories are at times opaque and quite stylistic but pointedly so and movingly so and so, without further delay, I will get to reviewing them! 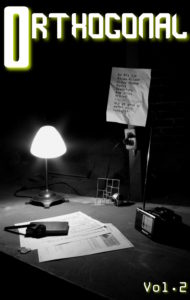 This is a bit of a strange story, but for something that seeks to examine the way and method by which humans assign narratives to the world, that rather makes sense. It features a man adrift, a man who seeks out aliens who can break his narrative urge, who can sort of impose on him a different way of seeing the world. Or, at the least, who can show him his own limitations. And I love how the story examines the human limitations of narrative. That it’s how we experience every aspect of our lives. That the world, to us, is nothing but stories. That the aliens are correct in that we cannot hear the truth. We cannot understand reality without a sort of story. It’s something that keeps humanity from being able to be truly objective. It destroys the idea that humanity has access to objective truth. But the story also speaks toward what I see as subjective truth, the truth of narrative, the beauty and the fragility of it. Here we have a man who seeks out this release from narrative because it seems he’s dissatisfied with the stories that wrap around his life. The aliens give him a release from that. But it is only a shallow escape, one that doesn’t last, and it still leaves a world that needs to be navigated. And as I read the story it speaks toward the idea of complicating your stories. Of seeking out other narratives. Not of letting a lack of the objective paralyze you but to allow it to force you to act better, to consider more, and to tell stories that incorporate more. It’s a kind of trippy story but it’s neat in how it posits life itself, reality itself, as this data that we filter and interpret through narratives to create our world. A nice start to the issue!

This story works for me on a few levels. On one level it’s a story about a rather unpleasant old woman who has been used to getting what she wants. Who can alter time and space and push people backwards, who can make terrible things happen in people’s pasts so that they are encouraged not to cross her. In this reading of the story she has pushed the president back in time and the military has sent a man to find out hwo and why and how to get him back. And in this reading that idea is somewhat played for laughs, because of the voice of the woman, because Aunt Bea, is quite a character. She’s strongly willed and rather offensive (TW for ablest language) and she’s so used to using her power to get what she wants that she doesn’t really care that this man is trying to get something from her. [SPOILERS] And in this reading she slowly tortures the man sent to question her and then kills him using her power. Which is rather shocking. And if that was it I’m not sure how much I’d like the story. But there’s something else here that I find a bit more compelling. The idea that Aunt Bea has lost touch with her reality. That the messed up nature of her past has to do with her ability to hold it in her mind. Things are confused and she doesn’t really know what’s going on. She’s lonely and, as the last line implies, is talking to herself. And this idea helps to complicate the more literal interpretation of the narrative. It provides the cipher by which it becomes more meaningful for me, which is about how this woman is slowly losing touch with reality and it manifests in this way, aggressive and confused and offensive. That it leads to her being alone, alienates her from others in the way that she believes she is literally an alien being. It’s an interesting story and one worth spending some time with.

I'm beginning to get an idea of what the issue might mean by code by appreciating how opaque some of these stories are. Like this one, which imagines the main character at a moment of transformation. Change. Growth. And yet also destruction. Emptiness. It's a stark story and one with a pervasive feeling of loss and alteration. The style is such that the proportions of the world are strange, inhuman. Even when they brush against the human there is a sense of foreignness and revulsion. That Nowrk knows that ze must change, that ze has always been on this path through this emptiness, but that it's not comforting, not rewarding. The story redefines the world based on fullness and emptiness where nature and contributing positively to the world are valued and when the more human world is revealed it is a perversion of that, empty and corrupting. I like how the story makes it a sort of metamorphosis, a naming. The main character enters the emptiness in hopes of being filled with something new and instead finds hirself being emptied. Being drained. Being drawn into this new world in such a way that ze cannot go back. It's certainly not a happy story, though Nowrk regains enough of hirself to stand. To be a part of the emptiness and want out. Where it will take hir is much less known, but I like the feeling I got that ze wasn't going to give in. That going back might not be an option, that there are certain changes we can't undo, but that we can still work through it, can still aim for something better. A fine read!

I love the way this story layers its narratives, creating overlapping stories of Heady and her various relationships. The various people who she let down and let her down. The ways in which who she is and the world that she must navigate doom her. The setting is vibrant and depressing, an asteroid populated by people with Deficiencies, people who are Skewed. Who carry some abnormality that means they must be kept away, treated as a drain because no one wants to see how they can be an asset. Because no one wants to recognize their beauty, only diagnose their difference. And Heady, in her interactions with her brother and then her lover, is denied a place where they can be happy. Where they can be fulfilled. The world that they live in, where everything is in flux, in danger, is something she can't protect her brother from, because of how he thinks. And is something that her lover can't protect her from, because Heady's Deficiency has to do with her size. She's large but brittle, and prone to injury, and being prone to injury in a world where you can't avoid it is draining both of Heady and for anyone who cares for her, and everyone finds that they cannot beat the system, can only weather it until they can't. It's a heartbreaking story but one that has a core of hope as the most present storyline involves Heady finding a woman on the street, a woman who tried to kill herself. And I love how the story handles being overwhelmed, handles breaking down without being broken. It resonates with me and makes this story something that shines. Something that rises. Despite the pain that laces it like the cross references it contains, there's also beauty and there's also healing and there's also hope. Definitely read this story!

The issue closes with its shortest story and also the one with the strongest twist. The one that deals with coded language in terms of true and false. That calls into question what it's possible to know is true and false. In that it's a bit like the first story only this one takes a much different track, showing a character in crisis and a character (maybe) in love. I like how the narrator calls herself into question. The way that she plants doubts about her motivations, about the truth. In some ways about how she seems at odds with herself about what is true and not, real and not. What seems to be more certain is that she has ended two relationships, ended them when they were getting more serious, when they would take something from her that she didn't want to accept. And in that she seems to me to be confused about what is true. Not only for herself with the narrative that the world tells about what people should want. About the ways in which people couple. Things happen that push her outside her comfort and she seems to shy away. But are the feelings she has real or not, true or not? And ultimately I feel like the story does an excellent job of showing that sometimes it's not so much about the factual truth about the statements. It's about the feelings behind him. About what is hidden and what is shown. What she reveals in the second part of the story changes how the first section can be read and showing that difference is a nice way to raise the curtain on what a tangled mess intent and truth and honesty can be. It's a complex and moving piece and very much worth checking out! A great way to close out the issue!
Posted by Charles Payseur at 1:00 AM