I almost thought that Fantastic Stories of the Imagination wouldn't manage to get this issue out in July, but here we are at the end of the month with a pair of stories about absences and choice. About the distance between people and how, sometimes, there is no closing that distance. About taking control and about seeking happiness and about the ways that we get trapped by relationships. In unhappiness. And the stories show different glimpses of people realizing that they do have a choice. That they do have a recourse. That they don't have to live in a stifling relationship just because their partners want them to. The stories complement each other quite well, and I'm going to get to reviewing them! 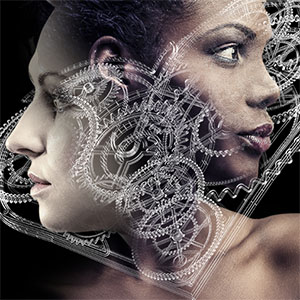 This is a short glimpse into the life of a relationship and the two people in it. It's also an examination of free will and choice and responsibility. And to me it's a bit about being trapped. In a relationship that isn't rewarding. In a life where it doesn't feel like there's any real choice, where a person becomes something of a passenger. It's telling to me that the husband in this story is excited to discover that free will is an illusion, that we are just a series of calculations that can be predicted. Telling because it must come as something of a comfort for him. A way to excuse any action, to make things not his fault. It's a train of thought that the narrator, his wife, plays with as well. Where she imagines that it could be used to justify anything. Like cheating on her husband. And yet she also sees the hollowness of that, the way that treating each action as if there is no other way it could go is just to give up. And, more than that, it's the way she's already basically been living. The way they've both been living. [SPOILERS] And I like what the story does in such a small space to bring up some heavily philosophical ideas. To show that the husband is excited because he feels validated and like he can relax, not worry about his actions, but in truth that's only letting his relationship die. And that his wife, who can see all these possibilities before her, kind of refuses to play that game. That she sees where it leads her and she refuses to be defined as just a moving part. That by the end it felt to me that she was going to push for change. That though the narrator's final words seem passive, there's something subversive there, an awakening that feels to me like it's going to lead to change. To stop being passive. To stop letting the past define her. To try something new and to break out of the rut she's in. It's a nice tale, understated but with a subtle power. A great read!

This is another story in some ways about choice. About what is past and what is present and what is future. This one, though, is also about time travel. About the narrator, a person torn between memories where she is with one woman and a present where she is growing close to another. It's a fascinating frame, one where the original partner, Sierra, has gone back in time. Where she exists in the memories of the narrator but removed by months. That in the present the narrator is alone and Sierra is just an absence. And that faced with that the narrator finds themself drawn to Dominique, a co-worker. The story is full of conflict and choice, the narrator not able to live off a relationship that, to them, is months in the past, unfolding there in their memories and not in the present. And the two paths, the two timelines, interact but don't recognize each other, touch only in the narrator. It's a story about rifts, and how sometimes they cannot be closed, cannot be bridged. And that sometimes the only way to face that is to not be torn in half over it. Is to pick a side and live on that side, to move on. I love how the story creates the distance between the narrator and Sierra, this feeling that they are living in different times, that Sierra is still somehow in the narrator's past, that the narrator feels trapped by it, like they aren't actually making decisions, as if the relationship is just appearing in their mind. And how damaging and lonely that becomes. How it was caused by the Sierra's drive to drive into the past knowing that rifts cannot be closed. Knowing that it was a betrayal of sorts, and that the situation was fair to no one. It's a touching story and a sad one, about the loss of love that never really loses its sting, even as it doesn't mean new love is out of reach. Definitely a story to spend some time with. Indeed!
Posted by Charles Payseur at 1:00 AM