The May/June Fantastic Stories of the Imagination is out and, as always, provides a pair of punchy stories that provoke and challenge. Both stories this issue represent somewhat new directions for the publication. One is a solidly science fictional story but with a healthy dose of the bizarre and is definitely not for the faint of heart, and the second story is interesting both because it's about the shortest story I've noticed from the publication and because it's solidly fantasy. Both stories manage to do a lot with the space they have, though.

And I want to mention that FSI is running a Kickstarter right now for the first of a series of planned Take Over issues, this one called Queers Take Over FSI.  It looks like an interesting idea and I can certainly say that since they've relaunched I've quite enjoyed the content that FSI puts out and hope they continue for a good long while. But okay, to those reviews! 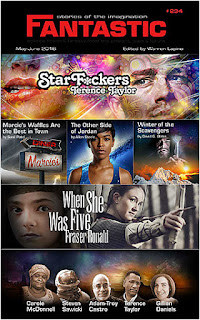 *Opens mouth* *Closes mouth* *Open mouth again, licks lips, takes a deep breath* So…this is a flash fiction not just about time travel celebrity sex slaves but about technology and abuse. The plot's about…well, did you read the part about the time travel celebrity sex slaves? It sounds almost like the lead up to a joke and in some ways it is. The story manages a sort of bizarro humor that walks a line between weird and goofy and incredibly dark and twisted. How much the story works will probably vary greatly from person to person but to me relies on how it manages to repulse and draw, to show both the depravity and harm possible with each new technological advance and also the hope and the joy that comes as well. There is this hand-in-hand nature of tech, which it allows for the furtherance of human experience and insight but also human cruelty and subtlety. The way the story draws the characters, all flawed, all tempted by the possibility of time travel but some knowing that with each step forward there must also come the ability to police abuse. Now there's a lot going on in this very short space and in some ways it works because of shock and speed, but slowing things down does reveal a good amount depth and an interesting story that certainly deserves careful attention. Because along with the pornographic premise of time travel celebrity sex slaves is a look at human temptation to abuse power and technology and people and how that impulse fits hand in hand with innovation and progress. It's an interesting piece and worth a read!

I will be honest, this is not what I've come to expect from FSI, and yet I'm definitely not complaining that it's here. Exceedingly short and sweet, this story is a series of moments, just moments, in a woman's life, growing up with parents who are warriors of some sort, or heroes, charged with helping others, with protecting others. It's a story that manages to work in the idea of legacy and conformity and what people expect from their monster slayers. A sword and muscles. And yet obviously that definition is unsatisfactory, is oppressive, and the story shows how this woman grows to understand how to be herself and have confidence in herself. It frames that as this series of moments that are largely based around a daughter's interactions with her father. Which is nicely done, the father supportive and understanding and, it seems, not really too much an asshole. Hurrah! [SPOILERS!!!] The daughter's relationship with her mother, though, is not here really examined. At least, the daughter has no moments interacting directly with her mother. And that's very interesting to be, because it shows a certain way that the daughter internalizes misogyny to the point that she doesn't want to ask her mother. She doesn't want to be like her mother. She wants to be like her dad and finds that she cannot and learns to be okay with who she is and what works for her. But it comes only after her mother is dead and she never really gets a moment to examine her relationship to the woman who blazed a path for her and yet who the main character never really wanted to be like. It's a complex story and obviously with under 400 words it doesn't expound. It does its thing and takes its bow and it works for that, gives a nice building story about heroes and the complexity of legacy. Indeed!
Posted by Charles Payseur at 1:00 AM

Email ThisBlogThis!Share to TwitterShare to FacebookShare to Pinterest
Labels: Fantastic Stories of the Imagination, Fraser Ronald, May 2016, Terence Taylor