And you thought maybe this was over? After just one week? Fat chance! No, Sippy is back and will continue to be back every Sunday in January. With relationships safely shipped out, it's time for the Sippy to set it's drunken gaze elsewhere. But where? Under the bed, perhaps? In the closet, where none dare tread?  Second up is--

I will fully admit to being a complete scaredy-cat when it comes to most things. Scary movies? Nuh-uh (couldn't even watch Ernest Scared Stupid as a kid because it was too intense). But scary stories? Yes please. There is something about a well-crafted horror story that just makes me itch for more. Maybe I'm a secret masochist, but horror has provided some of my very favorite stories of the year. Indeed, if I had to pick one stand-out publication this year it would probably be Nightmare Magazine. As the below list might highlight. In any event, let's get to the winners... 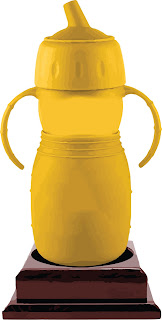 It came fairly early in the year but this was still the horror story that stuck with me. The structure of the work is just amazing, the way that it delves further and further into layers of stories and then starts to resurface, only something has come with, and it's creepy and that ending is just so perfectly done. The subject matter is perfectly matched and the elements in the story work and work well. Definitely keep the lights on when reading this story.

Here's another story that manages to tackle stories and tragedy and does a damn fine job of twisting expectations and delivering an emotionally hammering moment. There's such a hope that runs through the story, a fragile hope that gets more and more desperate, more and more frayed, and then everything just sort of falls away. The setting was also great, the sea of monsters, the stories, everything working to sell that moment at the water's edge.

"The Lord of Corrosion" by Lee Thomas (Nightmare - October) (My Review)

This is the first story on the list that uses the old trope of "something is wrong with the child." But it does it so well, focusing on grief and loss as father and daughter must deal with a force they didn't ask for, an inheritance they have to stand against, a violence that needs to be exorcised. It's probably the most out-and-out monster story on this list as well, of both the supernatural and the human variety. Creepy and heartwarming.

This is the shortest work on the list and also perhaps the most cerebral. It lacks in many ways a clear point of horror. There's no monster, not even a loss, really. It, too, focuses on a child with a special vision, a child being haunted in some ways, but it's much different from the last story. There is no force to be overcome, and the ending doesn't see a release from the nightmare. Instead the story goes in a much different direction, showing a parent's love in what they are willing to endure to understand their child. It's chilling and it's creepy and it's...well, it's short enough that you should probably just go read it right now.

"Soup" by Chikodili Emelumadu (One Throne - June) ( My Review)

This story surprised the crap out of me. A story with a talking fish seems almost...cute. And this story is, right to the moment it's not. And then it revels in a darkness that encompasses it, a horror of limited choices and good intentions and power and freedom. It does an excellent job of hiding what's about to happen until it's happening and then it's too late to look away, to late to unsee what unfolds. All because of a talking fish.
Posted by Charles Payseur at 1:00 AM