Okay, so October might have been an incredibly full one for short fiction, but I couldn't resist when I was asked to look at this new novella. Cooking! Urban Fantasy! Gruesome Deaths! There are few things in this world that will entice me more, and as this is a novella it didn't exactly break the bank time-wise. It is the longest single story I've reviewed on this site, but I've been meaning to read more novellas and this was a great place to start. And just in time for Halloween! I'm rather new to novellas, and very new to Abaddon Books, but given the quality of this story I might need to go out and see what else they offer. To the review! 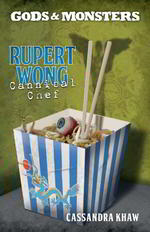 In the streets of Kuala Lumpur a war is brewing and Rupert Wong finds himself in the center of it, a pawn of everyone and very definitely not master of his own destiny. And it's this lack of driving charge that defines Rupert, that gives him a certain charm while also making the story deeper than it might seem at first when all the gore and humor distract from what is a rather layered message about the nature of corruption and the possibility of doing the right thing in a world where the chips are obviously stacked against it.

I say Rupert is charming because he is, his voice light and long suffering. He's the kind of put-upon detective that fits right in with the noir atmosphere and insane shenanigans that kick off the story and never stop as Rupert is drawn deeper and deeper into plots so far over his head it's surprising he's not crushed by the water pressure. Through it all Rupert is sarcastic and relatively calm. Part of it is that he's been around the block, seen a lot of shit, but there's something else going on that I want to touch on because I feel it gets to the heart of what makes this such an interesting story. It is: Rupert Wong is sort of an asshole. Yes, he tries to do the right thing in his mind, but what I found so interesting about the story was that he's not really a heroic character. He does good in the first place not out of any desire to see things better but to avoid Hell. He acts in this investigation not because he values the truth but because he has a lot to lose, or to gain.

Of course, it doesn't mean the story isn't incredibly fun. It is relentless in its action and rather cruel to Rupert any chance it gets, which means there's a lot of laughs and imagery that lives and breaths and sells the monsters present, the ghosts and gods and demigods, the violence and the shit and the absolute craziness that Rupert meets with an even gaze and a nervous chuckle. What it does mean is the story complicates the idea of the hero, the idea of the gritty detective, by being more transparent with Rupert as a character. With many noir stories, the detective is a gritty anti-hero, but the emphasis is still on hero. The idea is that they do more good than harm, that they get to the truth, that it takes a bad person to navigate a bad situation. Here, the emphasis shifts ever-so-slightly, because the feeling is not that it takes a bad person to face the clusterfuck of bad intentions that surround this mystery, but that bad people make the bad situation. That the selfishness that pervades Rupert (his desire for a "normal" life, his desire to avoid Hell, his desire to avoid the suffering he knows he helps perpetuate) is what ultimately allows the system to be corrupt.

And I think the stories does an excellent job of capturing that complex interplay of intent and outcome. It refuses to paint Rupert as either a hero or a victim. He is an agent working for himself, and by getting the reader on his side the story makes the reader complicit in his crimes, something that starts small but grows larger and larger, Rupert always thinking he's doing right while the reader must face their growing unease at each new layer of violence and crime. Not that Rupert thinks he has much of a choice, given the situation and the players involved, but that assumption of powerlessness is what beguiles him and the reader into thinking the situation must be faced with complacency. There are moments when Rupert has the opportunity to examine what he's doing, and he rushes on blindly instead.

What sells the entire story, then, is the ending, which goes out with more of a whimper than a bang. Not only does it set this up as only the first part of a larger story, but it refuses to let Rupert off the hook, refuses to let him be the hero riding in on a silver horse and setting things to right. Which is a great way to go it because it again confronts the reader with their own desire for that big showdown, confronts them with their own expectations about heroism and how stories work. Here the solutions are not black and white. The world is cast in shades of gray, and everyone has to deal with the implications of their actions. There is no real absolution. It's not the most satisfying of endings, but it fits, and it unsettles in a way that I think is important. In the end, the work succeeds at building a compelling world, a rich cast of characters, and a complex plot. I can only hope there is much more to come.
Posted by Charles Payseur at 1:00 AM