Two stories this month from Urban Fantasy Magazine, and both are about loss, though in vastly different ways. In the first story, the loss is of a wife, the main character dealing with the death of his love and seeking to find some way to fill that lack in his life. In the second, the loss is of a mother, and the situation is very different, the mother a sort of curse that is following around her son, her death a thing haunting him. In both, though, there is hope of recovery, of moving on, and perhaps of a lifting of the isolation the loss has caused. To the reviews! 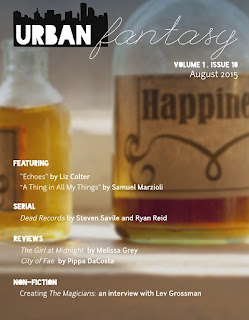 This is a fun and rather rising story about Edward, a man dealing with the loss of his wife and having to raise a sun alone in an England of long ago, when a few pounds could pay for living for an entire year. Edward is a sort of potion-maker, one who can harvest the echoes of emotions from people and create from them ways to deliver them to others. Contracted to provide a potion that might drive a man to suicide, Edward is forced to face his own past and hold in his own chest the echoes of despair, echoes that threaten to drown him in hopelessness. The story does a very good job with Edward and with his son, Samuel, showing their relationship and affinity for emotions, how the echoes work their way inside and how they both are trying to move on after the death of Mary, Edward's wife and Samuel's mother. That Edward is doing something he doesn't want to, something that could lead to the death of someone he doesn't know, weighs on him, as does what he must to provide, facing the life that he left behind, the mother that he was unable to help, who is so filled with the want to kill herself that Edward knows she will not last long. Meanwhile it is Samuel that proves to be the true hero of the story, using his gift to try and help his father and usher in a time when they can be happier, when they can be together and past the guilt and shame and fear. It's a strong story, with a fun premise and a sweet ending. The time period is slightly vague but worked, and the characters, especially Edward and Samuel, seem alive and vibrant, flawed but trying to do the right thing. A fine story!

A quite short story about a man dealing with a...a thing. A little monster, a creature that hides and degrades him, makes fun of him, keeps him alone, afraid. It's a fine and fairly creepy one, though the point seems less about being scared of the monster and more the pain that Tom goes through because of it, how it keeps his alone, how it infects everything that he tries to do. And the story is about how Tom goes about finally dealing with the thing, dealing with his past and the person who the thing represents. This is much more on the "real" side of things than most of the stories that get into Urban Fantasy, the monster in this case quite expressly a manifestation of Tom's mother, of the voice that she planted in his head by constantly telling him that he was worthless. It manifests, but it's more a mental disorder than a physical monster. Still, it's also something of a curse, is something magical because it's not about getting help. Tom sees professionals, after all. This psychic curse is something that has to be faced, is perhaps the manifestation of his own unresolved business but is magically so, for it takes actually confronting his past, his problems, to [SPOILERS] get the thing to go away, or at least fade from the "real" world, fade from where it makes him interact with it and weird other people out. It's a good story, highlighting the relationship between Tom and his mother, between Tom and his world, showing him wounded, in pain, in need of something that he's not getting, another voice perhaps to drown out the one that constantly tells him he's worthless. Well done and rather creepy, it conveys Tom's situation well, and is a good read.
Posted by Charles Payseur at 1:00 AM