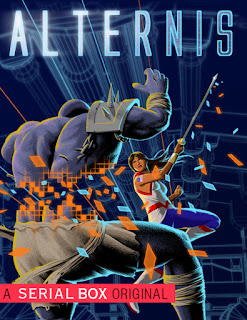 I’m starting my look at a new serial project from Serial Box, Alternis. It is available for preorder right now and will drop in just two days. Two days, people! For those not looking to be spoiled, keep it to the No Spoilers section (of ep01, as the ep02 recap has mild spoilers)! Like with the previous Serial Box works I’ve covered, this project is imagined as a show in text form, these two episodes representing something of the pilot and immediate follow up. And as an introduction to this new world they do a fine job of conveying both the terror living in the background, the threats of global war and catastrophe, and the weight of the foreground, the grind of trying to get by in a world where the safety nets have largely been cut away, leaving everyone one step away from the abyss. The main character here is our entry into all of this, a woman hustling to live and reach for something like security when that seems the more impossible of dreams. Only her portal into a better world ends up being a bit more literal than she thought, and through a strange confluence of events she’s thrown into a global competition that will decide the course of human events. It’s an ambitious opening, and one I’m very excited to see where it will go. To the reviews!

No Spoilers: Tandy Kahananui is an amateur game programmer and current cubicle drone, using her skills to try and stay afloat long enough to work the bugs out of her dream project, an MMO called Alternis. The game is her passion, taking up as much energy as she can spare in a world that is perhaps finally walking back from the brink of distaster. Global tensions are still high, though, and locally power shortages are making things a little less than great, but there’s reason for hope. What Tandy doesn’t know is that the reason for the improvement in the global situation might be linked to Alternis. Thanks to a glitch in her data usage, though, it’s something she’s very much drawn into, and she ends up tumbling head over heels down the rabbit hole into a political quagmire that mixes science fiction and fantasy in delightful measures. The premise is something like an all grown up version of the animated Dungeons and Dragons show, except instead of kids pulled into a fantasy world to take on a dark wizard, it’s a group of professional gamers and government agents competing for something much more tangibly real.
Keywords: Video Games, Dayjobs, Politics, Immersion, Coding
Review: First off, I love the way that this game is at the heart of so much, how it represents something like hope in the storm of war and uncertainty that is raging around the globe. And it makes so much sense that here is a literal escape, that for Tandy has been her entire way of coping with the danger and the fear, the stress and uncertainty. This is her dream, her hope, and it’s like something in the simple AI that assembles this landscape for global competition and peace picks up on that, finding in her vision something that resonates with the needs of the world. And it’s something that acts both as violation and opportunity for Tandy, because of course she’s not asked for any of this, is just trying to get by and make something she can believe in and maybe, if she’s lucky, pull herself out of the pit she’s in and get a little security and creative fulfillment. It’s something I’m sure resonates with a lot of people whose dayjobs don’t actually offer a pathway to actual security, and so they find themselves trying to sidegig in order to be both intellectually fulfilled and maybe at some point financially successful.

The piece itself is a bit strange in terms of tone, though that might be because it is something of a large pill to swallow that the nations of the wold would agree to settling their disputes via a video game. So the tone is both realistic and pure fantasy, slightly humorous and light but in a setting laced with darkness. There’s a bit of whiplash from the realizations leveled in this episode, and a part of me suspects that Tandy isn’t being told the whole truth, and that the stakes of the game are even more real than she suspects or is being told. In some ways I feel like the episode is purposefully misleading in some ways, focusing on a bit of the wonder and magic that this situation seems to hold (world peace through an MMO fantasy role playing game) rather than looking a bit deeper to the much deeper and foundational issues that it’s covering up. Maybe it’s the cynic in me, but there is a sense I get that this is Too Good To Be True, and while it’s possible that this might be a light and fun romp, I suspect that there’s going to be a growing sense of dread, danger, and conspiracy as Tandy discovers all that her game is being use for. Which also brings in a different angle to look at the game, as one about authorship and control and participating in a system that might be corrupt. Because Tandy wants her game to be good, wants it to allow others to cope, wants it to inspire and bring people together. But once it’s out of her control, once it’s out there in the world, it can be used by whoever is playing it, and not always in ways that she anticipated or approves of. In that way, it’s a piece about the dangers of authorship, the disillusionment that can happen in not only trying to make art, but trying to make commercial art. And whoa boy, that’s a big can of worms that I’m really excited to see the series play with in sibtle ways.

And really, this opening episode is a great intro to the world and the premise without getting too much into things yet. There’s a magic but also a sense that we’re only seeing the surface, only the promotional material that’s been curated for public consumption rather than the nuts and bolts and visceral mechanics that are going to really define how the game plays, and by extension how the series reads. But as a hook it’s successful for me, promising a layered and fascinating exploration of politics, economics, and gaming. Tutorial complete! +500XP!

“A New Player Has Joined” by Andrea Phillips (serial ep01.02)

No Spoilers: Fitting in with a new group is no easy task, especially when the group has been working together for a while and you’re replacing someone they all knew and liked. And especially especially if none of the rest of the group chose you to join. And it’s exactly the situation that Tandy finds herself in, thrown into the existing dynamic of Team USA and having to deal with being not only woefully behind in level but also having to justify why she’s been chosen to replace a seasoned veteran. The episode also gives us a first look at some other perspectives, spending some time both with Etta, the diplomat and team leader, and Dante, the fighter and pro gamer. Both offer different takes and approaches to the game, as well as a few hints at potential problems in the future.
Keywords: Video Games, Riddles, Competition, Quests, Politics, Teamwork
Review: So I feel that a lot of this episode deals with secrets and with warnings. The main conflict here is that Tandy still hasn’t actually told the group why she’s been recruited. All they know about her is that this is all new to her, and they have little reason to have confidence in her abilities or her usefulness. Let’s not forget, as the opening to the episode warns, this game has very real consequences, and while Tandy here is just sort of getting used to the world and everything in it, the stakes are high indeed with everything that they do. It’s a bit unclear here how exactly they are being scored, if it’s by level or quests cleared or what, but what is clear is that the addition of Tandy hurts the team at first instead of helping them, and their first priority is to get her up to a level where she can keep up with the rest of the team. That secret she’s carrying, though, is what sets the tone in an episode where everyone seems to have alterior motives and hidden agendas.

Also okay I love that Canada is in front and part of what makes me wonder about how the teams are judged has to do with them being ahead and with the ways the NPCs work inside Alternis. To me at least it definitely seems like the game is valuing more than just killing things. It’s pulled something out of the designs Tandy had for her game and the care and love she put into it, and that manifests by the ways the world seems to want to be interacted with. The way the NPCs are kind and helpful and often can give more if the team takes the time to listen to them and engage with them. It’s something that Dante can’t stand, and even Etta doesn’t see much point in, because these aren’t “real” people exactly, but what with having an NPC desperate and drunk trying to warn the team to go clear the tutorial quest, I do get the feeling that it’s important here to do things “right.” Not just as a game, trying to cheat the system as much as it will allow (hello capitalism) but rather to try and get to a place where people are playing in good faith, trying to have some fun, trying to enjoy the world that they find themselves in. Which is why I hope Team Canada is like 1000% polite and low key and that’s why they’re doing so well.

This section does show Tandy starting to get a bit more confident about her place, and I like the way that she brings a different perspective to the group, one that is a bit less jaded and a bit more eanest. A little naive, perhaps, but more desperate for an outlet in a setting that is so crushing, so difficult. This is how she’s made due with life, and she’s managed to hold on to a bit of...not innocence exactly. But some of her belief that people can act in good faith. Which is vital to making a world where acting in good faith is expected and, indeed, required. Because if the starting point is the assertion that people will not and cannot operate in good faith, then the battle is already basically lost. Then corruption is inevitable. And I like the sense she brings to the action that even as she’s new and has a lot to learn about playing the game, she has a lot to teach as well. It’s fun and it provides a nice escalation and twist at the end of the episodes, and it’s so worth checking out. Do yourself a favor and subscribe to this one!

Posted by Charles Payseur at 5:49 AM