I keep on expecting Tor to decrease their short fiction offerings after a very busy January, but the hits just keep on coming with three new short stories and a novelette. The themes and the genres vary rather widely, from historical fairy tale to far future and far flung science fiction to a weird piece about a weird manuscript...and aliens. The works take on some wonderful settings and some fascinating characters, all while dealing with themes of loss and relationships. And there's plenty of fun and action to balance out the heavier emotional beats, so it's really a strong month of fiction. To the reviews!
Read more »
Posted by Charles Payseur at 1:00 AM No comments:

The three stories and one poem in February's Fireside Magazine have a lot to do with family, and harm, and the possibility of escape. An escape that is complicated by a history of pain and abuse, exploitation and pressure. The stories range from contemporary fiction to fantasy to science fiction, all of them grounded on Earth. The action involves the complicated roles people have within their families, within the bounds of expectation and desire. It's a dense issue, and a careful one, and before I give too much away, let's get to the reviews!
Read more »
Posted by Charles Payseur at 3:51 AM No comments:

February closes at Strange Horizons with two more issues featuring one short story and two poems. The work does not disappoint, though, with a story that really does some innovative things with cosmic horror, including rejecting one of the major tenants of what's supposed to make the genre so terrifying. Add on some poetry that manages to be affirming and strange and haunting, and the issues do a wonderful job of capturing some of that February feeling. Not the romantic vibes, but rather the chill just showing signs that maybe spring isn't too far off. To the reviews!
Read more »
Posted by Charles Payseur at 3:50 AM No comments: 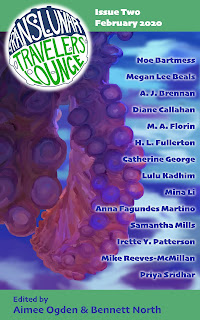 Translunar Travelers Lounge is back with A Lot of new fiction. Like with last time, I’m breaking the issue out into three parts, based on the publication’s own tasting menu. First up this issue is the Fruit and Cheese Platter, which promises works that are juicy and quirky. And the stories certainly deliver there, offering up five pieces that are at turns funny and action-packed, full of magic, day jobs, and demons. And characters who have had enough of forcing themselves to be small, to be convenient. They are ready to break out of their cages and take on the world—sometimes figuratively, sometimes literally. The issue oozes charm, and is lots of fun, while still making some deep points. To the reviews!
Read more »
Posted by Charles Payseur at 3:55 AM No comments:

The latest from Heroic Fantasy Quarterly brings two short stories, a novelette, and two poems that celebrate fantasy. Now, that celebration is a bit...dark this issue, thanks to a focus on some grim themes of redemption, debts, and revenge. Each of the stories features characters trying to make up for events in their pasts, trying to seek something like atonement, even when they’ve done nothing wrong. Not all of them are exactly successful. But in looking at their struggles the stories reveal settings dipped in corruption and prejudice, full of hungry jaws waiting for a moment’s weakness. To the reviews!
Read more »
Posted by Charles Payseur at 3:52 AM 1 comment:

The two stories of Diabolical Plots' February content deal with trials and struggle, though in very different ways. One is a contemporary sci-fantasy, an invasion story, about resistance and complicity. The other is a second world fantasy where winged people fill the skies, except for one youth who must deal with living more grounded. The pieces find characters who are faced with choices of either accepting a status quo that is stifling, or taking a chance and risking everything to fight for something different and better. The characters don't exactly all make the same decisions about what to do. So yeah, to the reviews!
Read more »
Posted by Charles Payseur at 6:22 AM No comments:

THE SIPPY AWARDS 2019! The "Where We're Going We Won't Need Categories" Sippy for Excellent I Don't Know What in Short SFF

Welcome to the final installment of the 2019 Sippy Awards! So far we've covered relationships, horror, making-me-cry, and action in short SFF. What does that leave? Well...the thing is, sometimes there are stories that just don't fit into a specific box. Especially with speculative fiction, where the rule is you must break the rules. It means that there are ample opportunities to be innovative, to do things that don't fall in line with the traditional or expected. And for that I have the...

So sometimes it's hard to look at stories that are doing something rather different. Because they don't always fit nicely into the same discussion as other, maybe more mainstream stories. Except that they stand out as doing something new. On first glance, maybe they just seem weird. Odd. Many of them might be dismissed as just that. With maybe a few words on the beautiful language, and maybe a few words on how they were different. But I really love stories that sort of blur the lines between form and message. Where the way the story is told is part of the impact of the story, even as that impact is difficult to define. There isn't a lot of connective tissue between the stories in this category--they are doing some very different things. But that is actually what holds them together here, that each is innovative and daring, that each takes chances and risks that, for me, pay of wonderfully.

So where did these stories come from? Well, from a number of rather unconventional places, as one might guess. From Fiyah, whose mandate has always been to publish black voices who might fall outside the conventional (which is often viewed as the very white "classics" of the SFF canon). From Escape Pod, which innovates not just with what it publishes but by how it publishes, as a podcast for science fictional stories. From Strange Horizons, which in many ways has led the push to innovate the field as a non-profit and as a champion for stories that do something different and new. From Tor, who as one of the largest publishers in the genre is still invested in not falling behind the curve when it comes to experimental and challenging works. And from Lackington's, whose voice and style set it apart, a publication that knows what it likes and doesn't care if that falls outside what is often more popular or mainstream. The stories are dazzling and different, strange and haunting and good. So let's get to the awards!

Read more »
Posted by Charles Payseur at 1:00 AM No comments: