THE SIPPY AWARDS 2018! The "Where We're Going We Won't Need Categories" Sippy for Excellent I Don't Know What in Short SFF

Welcome back to the fifth and final category of the Fourth Annual Sippy Awards! It’s doesn’t have the history or prestige of the Hugos or Nebulas or...well, any other award, but I like to think the Sippys represent a much needed niche in the award season. For me, at least, it’s a chance to celebrate the stories I loved from the last and remind myself that not everything is about the Big Awards. Sometimes it’s rewarding to just love what you love, and make no excuses for it. In that vein, the Sippys were born, and I definitely encourage everyone: don’t be shy about celebrating the stories you loved. Make awards for them, write reviews about them—have fun and add a bit of joy into the universe!

But anyway. I’ve shipped my favorite relationships, hidden under the covers from the scariest horror, wept rivers for the most emotional tear-jerkers, and drove fast and took chances with the most pulse-pounding action! Which leaves just one category to go, and it’s...

So what's the deal? Well, the thing is, categories are tricky things, and no matter how I refined my original ideas for them, there seemed to be something...missing. Because what about those stories that just...don't fit? Part of why I love SFF is that the stories can be almost anything, can cover ground that's never been explored, can blaze trails and innovate in ways that other genres just can't. SFF is the genre of dreams, of strangeness, of uncharted stars. It's a place where things can get downright weird on a regular basis, and that's completely Okay! In fact, I love that! And this category is where everything goes that just doesn't fit anywhere else. They inspire, and they provoke, and they challenge, and they entertain. I don't know what else to call them, so I'll just call them excellent!

For venues, there's two making their first appearance in this year's Sippys. The Dark just managed to punch its pro-paying ticket, and though that might change with the recent updates at the SFWA, for now it's definitely a voice from wonderful (and as the name implies, certainly dark) SFF. And Fireside Magazine is putting out tons of amazing work. Though much of its content leans short, it's also put out novelettes and even novellas, and is (I hope) a rising star in the field. Returning to the Sippys are works from Clarkesworld, Uncanny, and Apex, who all definitely put out a lot of content that's often hard to quantify. So yeah, let's get to the awards!

So you want to talk weird? This story follows an uprising of sentient dinosaurs who have been raised for their meat and it's a kinda bizarre but also sharp critique of colonial narratives, showing the consuming history behind the "noble savage" storylines. In some ways, it's like The Last Samurai if the samurai were intelligent lizards. Just brilliant satire in the most unexpected of ways.

“The House on the Moon”, William Alexander (Uncanny) [short story]

Coming out of an absolutely stunning Disabled People Destroy Science Fiction!, this story takes place on the Moon in a future where warfare and attempted genocidal "cleansing" make for a very loaded and difficult setting. For me, it's a story about the weight of history and the need to reconcile with the sins of the past. It's an incredibly fun read, growing out of some very dark times to reach for a future without fear.

Bill and Bob are brothers and exorcists in the family business, and business is always busy. After a bad outing, though, Bob's lost a lot of his direction, and his ability to do the Work has been impacted by his lingering grief, guilt, and anger. So it's up to Bill to draw him back to what he does best through a walking tour of hauntings that slowly reveal the truth of what's happened, and lays out a path forward for Bob, so that maybe he can get back to living.

This is a captivating and weird and glorious story about identity and family and expectations. It features Kupua, trapped in some ways by the lies he's tried to live with, with the hopes he's tried to kill. Caught between definitions, between genders, between cultures, she's floundering when Coyote enters her life and kicks it hard enough to shake loose the bullshit and rationalizations that have built up around it. The rest is entirely up to Kupua... 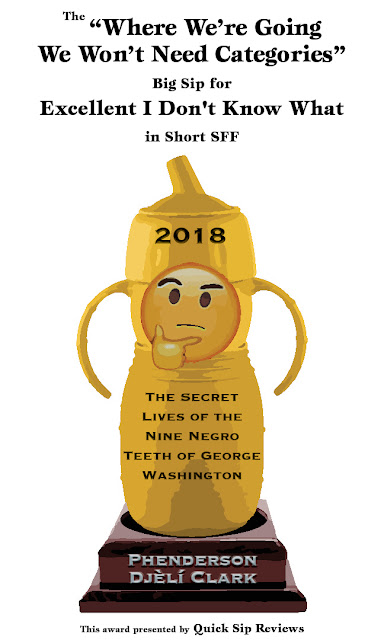 Challenging history and our complacency with it by completely reimagining the events surrounding the formation of the United States of America, this story is dazzling in its world building and unflinching in exposing the taint dwelling at the heart of the myth of America. I just absolutely love the way the story uses fantasy to show how actual history has been consumed by the storybook versions of the "founding fathers." How our textbooks have erased or rewritten lived realities and abuses, genocide and slavery, into more palatable narrative that we can sell our kids. That we can be proud of. That we can love without conflict. When the truth is that this version of events holds more of the spirit of what happened than the lies we often teach in schools and see on bookshelves. That here, for all the magic and the touches of fantasy, at least the larger factual injustice is not committed, and we get a sense of the men behind the myths in a much more nuanced and likely accurate way. The story reminds us that we must be critical of the legends a country tells about itself, and must not overlook the horrors and the atrocities that helped to build a nation that no one should be able to love without complication. And it's a wonderfully imagined, incredibly fun, appropriately challenging story that you owe it to yourself to read!