LIVER BEWARE! You're in for a Drunk Review of Goosebumps #5: THE CURSE OF THE MUMMY'S TOMB 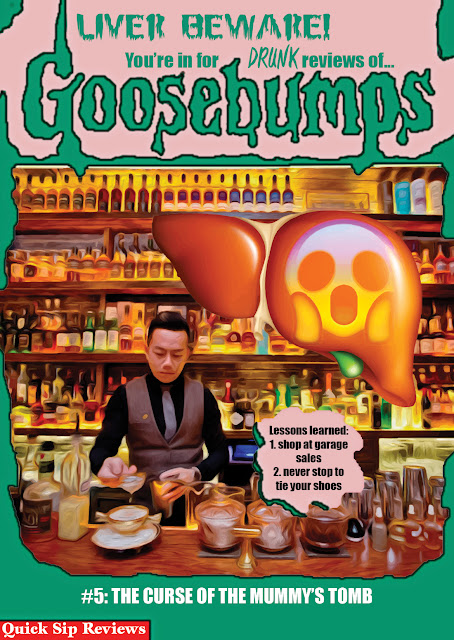 Oh glob, where to start with this one?

Well, I suppose I should begin with a quick look at what I’m drinking. If you don’t know about Founder’s Brewing, you should. Their Breakfast Stout is a Christmas morning tradition in our house, and I’m just sort of a fan of a lot of what they do. I’ve been waiting, though, to be really impressed with their IPAs, and with Azacca I think I have found one I am fully satisfied with. And hey, it's named after a Haitian god and tastes magical, which is much more than I can say about this book. So ONWARD!

Seriously, this book. I figured we were at something of a low point with the last installment, but I guess the bottom hadn’t dropped out just yet. I will say, though, that this is the first time that the series takes the show on the road, as it were, all the way to Egypt! For a series that looks so squarely at a certain kind of middle class whiteness, it’s almost a surprise to find that the main characters here might not actually be white. The main pair are cousins, Gabe (the “real” main character) and Sari, who is an all around more interesting and active character but I guess that’s not enough of a reason to make her the focus of the book. And I said might not be white because the book does a terrible job describing race. This is something that bugged me back in the first book when the main family was described as having “dark skin” but seemed to just have, like, a more olive complexion. But it’s quite possible that Stine just wants to appear post-racial by having his characters have fairly generic but at-times vaguely “ethnic” names and just letting the readers decide. The characters are described as being of Egyptian descent, though, so there’s that.

And I will give the book credit that Egypt is not exactly portrayed as this exotic wonderland but rather a fairly normal tourist location. People speak Arabic, yes, but it’s not like the setting itself is especially sinister. Most of the people are very kind and helpful and there’s a rather interesting scene where Gabe wants to ask to take home the Frosted Flakes box with the Arabic language on it but is too embarrassed to ask and that particular part felt very real to me. Of course, the book is also incredibly reductionist about a lot having to do with Egypt and the pyramids but it doesn’t do nearly as bad a job as it could. Maybe because it was written much before 9/11?

Anyway, blah blah blah, setting and characters and the plot has something to with Gabe’s uncle (Sari’s father) working a dig in the pyramids and finding some new passages. One of his assistants warns him away. He pushes forward anyway. Hijinx ensue. And by hijinx I mean attempted kidnapping and murder. Fun!

Okay, so last book I was kind of struggling to find some larger message/commentary going on because evil magic camera is just...weird. But this story has a very clear focus, and it’s on the terror of being the outsider. I actually think it’s an interesting angle to have Gabe, who is diasporic Egyptian, come back to the pyramids and the country and feel terrified by them. Not really because there’s something out to get him (there kind of is but only at times) but because he has this insecurity and tension about being an outsider. Not knowing the language well. Not knowing the landmarks. Feeling in some ways like he is an intruder and unwanted. I mean, the story spends perhaps way too much time with that particular fear instead of focusing on, you know, mummies and curses and tombs, but it is something that gives this book a bit of depth to it and makes Gabe a more complicated character than he would have been otherwise (though, let’s be honest, he’s still an annoying little bastard). And I do rather like the play between Gabe and Sari. They don’t really like each other but it’s more than that. Sari is closer to her roots than Gabe despite them being in a similar situation and Sari uses this to fuck with Gabe by pranking him to within an inch of his life. It’s actually pretty great, though the pranks are a little lame (though I have a theory that WE WILL GET TO!).

Unfortunately, with this added wrinkle to Gabe’s character, we come to the biggest issue I have with the book—it is BORING AS FUCK! Seriously like nothing happens the entire book. Yes, we see Gabe struggle because he’s left with his uncle and cousin while his parents go off to do something else but like every “exciting” thing that happens in the book is that Gabe gets lost. His cousin tricks him in the pyramid—Gabe gets lost. They have to run away from a guy who might be trying to kidnap them—Gabe gets lost. They’re in the pyramid again, after they’ve been told they need to stay together and not get lost—Gabe gets lost. I shit you not they put the electronic equivalent of a bell on him and HE BREAKS IT AND GETS LOST. I’m pretty sure at that point it would be best if he did just get tossed into the burning tar pit.

Oh right, there’s a burning tar pit. Okay, so there’s one interesting part of the book. The ending. Surprise, surprise, it’s also the only part that even approaches being supernatural. Because, well, pretty much the entire book is concerned with very...mundane threats. Getting lost, as I said. And some guy who might have something to do with the pyramid. But even the mummies in the story are just props for nearly all of the book. There’s no real magic that is at work here. Even when the dude reveals himself to be the “guardian of the priestess” and responsible for keeping people away from her chamber, there’s nothing that falls outside of “things that could totally happen.” He's not magic. Just really obsessed with his roots, and in that we do get to see a nice mirror to Gabe's estrangement, but while it's fascinating it's also a kids book for fucks sake and I want something a bit more immediate. A flaming skull. Some sort of alien. The Rock as The Scorpion King. I mean, I’m not super picky and I know that horror comes in many flavors but I did want something to be magic here. Instead, no, all we get is the completely boring guy who is obsessed with this chamber and not-exactly-boringly murders people who get too close. Ho hum.

I just...okay, yeah, that’s a pretty weak reveal right there, that it's just this…guy. No cat witches. No evil magic scientists. No vampire-ghosts. Just a regular dude who regular murders people. In a tar pit, I grant you, but still. And then...and then magic decides it’s been waiting too long and arrives in the form of...a complete fucking Deus Ex Mummy Hand. Yes, Gabe has been in possession of a mummy hand throughout the book. That he bought from a garage sale. I’m pretty sure it’s like a keychain or something. And it just so happens to be the hand of not only a real mummy, but the mummy of the priestess whose chamber they have “defiled.” And, okay, I can go along with some of this. I can. But the guy who’s trying to kill them is the fucking guardian of this priestess and her chamber, which I assume means that she’s still, you know, there. According to him, no one has ever gotten away from his or his murderous ancestors. So...HOW THE FUCK DID THEY LOSE ONE OF THE PRIESTESS’ HANDS? Did one of them use it to pay for pizza when money was tight? And then...it just happened to end up in America, in a garage sale, that Gabe just happened to be at?

So, fan theory time. It was all a prank. This was all Sari’s delightful revenge on Gabe for...being Gabe. She orchestrated all of it. The kidnapping, the tar pit, the mummies that come to life at the call of his magical key chain and scare away the bad guy. She watches, triumphant, as Gabe preens with pride at the good he’s done. At how he didn’t soil himself. At how he somehow "out Egyptianed" the obsessed priestess guy. And she knows, she knows that it would destroy him to know that it’s all be a sham. That it’s all been fake and he fell for it. It would crush him. And I think a part of her pities him then. Pities him enough that she doesn’t pull the trigger, doesn’t shatter his illusions. But also sees the power in this narrative. She just...lets him believe. Lets him think that he’s had this moment of connecting to his heritage. To his culture. Lets him think he’s been brave for once when really, really, all he’s done is fail to see that Egypt is more than mummies and magic. More than Tony the Tiger with Arabic letters. And she lets him go because she’s learned something about the world. That people want to believe the lie. And that she can use that. I imagine that after this she goes into tourism, to “authentic” Egyptian experiences, and completely cashes in, funneling her fortune to fund expeditions and digs and studies by Egyptian scientists. And Gabe...Gabe keeps his shitty key chain and tells whoever will listen the story of how he saved the day. He is the only one who believes it.

So okay, you’ve read the review. Now let’s break it down with numbers!

On the "Would I write fanfiction scale of greatness": 1/5 (Bleh. There’s really not much to work with here. I guess the guy with his mummies might be kinda interesting but also all the ick. Maybe you could pair the uncle with the murderer. They both worked on the same dig. Maybe the killer would go so far as seducing his boss to try and keep the priestess safe. And maybe then he would develop feelings that would be their own kind of betrayal...)

On the "Is this actually good scale of more trying to be objective": 2/5 (You know, there is some interesting stuff here about being diasporic and being afraid of yourself in some ways. It’s not a great book by any means. It’s boring. It’s got some serious plot holes. But this one reading makes it a little bit more than completely awful to me. So there’s that.)

On the "Yeah but this is Goosebumps scale of relative wonderment": 1/5 (Yeah, I know, it’s worse than the “objective” score. But this is more disappointing as a Goosebumps book than it is disappointing as a book book. Seriously, there’s like nothing to it and the reveal is boring and there is no twist. No. Fucking. Twist. I am all flavors of let down by this book. Here’s hoping the next one is better.)