In something of a departure from my normal schedule, I’m looking at two short stories released individually from Prime Books. The stories fall heavily into military science fiction, with wars that take place across solar systems and beyond, and soldiers trapped, for all the broad horizons of warfare, into suffocating roles thanks to loss, grief, and the drive for conflict. Nestled into narratives about corrupt empires and delicate subterfuge are themes of family, resolve, and the way that justice blurs into something else in the face of atrocity. These are stories of soldiers facing the unknown, cut off from orders or the immediacy of battlefields, having to change the way they think about conflict, or else be ground up by it. So yeah, without further dalliance, to the reviews! 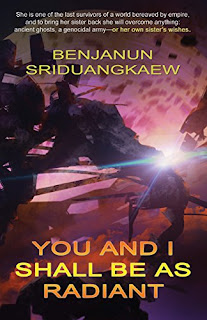 This story swirls around trauma and war, about returning home and finding what’s left after the war is over but before there’s really peace. At least as I read it, for Emilia, finding the war she’s been fighting for two lifetimes doesn’t come as a relief, but with a new set of problems. Namely, a return to the life that she had in some ways been running away from. A return to the life that she had given up on, with an ex-wife that it’s far too easy to slip into old habits with. But there’s also a lack that the war gave her, a lack that sex and employment can’t really rise to touch. Emilia is left with so many difficult decisions and one easy one, one that seems to be pulling at her, that has her caught in its gravity. I like how the story sets up this situation, this future world where major governments fought a proxy war on a distant planet and for so long bent all they had to the conflict, which people lived and mostly died for...well, that’s a large part of what the story leaves unsaid, the real reasons behind the war, the reasons that Emilia never thought to question, that she only accepted because it offered her a place, a purpose, and a sense of uncomplicated belonging. Without that, the reasons are starting to nag at her—those of her government, and those of herself. The piece does a great job of setting up the shock of what has happened, the sense that even with the ability to get a new body, a new life, Emilia is like a record skipping, playing over and over the same few notes, unable to clear the break and get beyond. And I love the way it explores this past that she has buried under combat and distance, one where she was in love but afraid of losing her wife, to the point that she stayed away until it was a moot point. That she’s come back into a young body completes this feeling of cycles and revisiting the past, but it also shows where Emilia is in many ways, still that young woman from before the war, older in some ways but in others always on hold, in statis, a pressed flower ringed with thorns. The story explores the ways that she can go forward but also the ways that her choices all seem to narrow to just one, and not one that’s any better for her. But because of the lack of support of returning soldiers, because of the lack of regard for them as people, this cycle plays out. Until, at least, the end comes and breaks things apart (including my heart, because fuck, that ending...). It’s a lovely and wrenching story about war and trauma, peace and healing. And it’s very much worth checking out!

This story speaks to me of loss and grief and hope, and the idea of being conquered. The story opens on Feilin, who has spent five decades seeking a weapon to save her home only to find, at the last moment, that she doesn’t have a home to save. It’s this pivotal moment that ends up changing Feilin, fundamentally altering who she is, who she sees herself as. Instead of a soldier, an operative, with a home and a family and people, she find herself cut off, a bit of material stranded when all roads back were burned. [SPOILERS] In fact, that’s something I very much like about the story, that this weapon that Feilin was looking for for so long is in some ways a tool of isolation, a tool of destruction on the scale of what has happened to Feilin’s home. A way of eviscerating lines of connection, of stranding planets and armies and people away from the support they relied on. [END SPOILERS] For all the huge scope of what the story reveals as possible, though, it’s focus is much more intimate, showing Feilin trying to pierce the sudden and profound distance that has come between her and her past by saving something from it. By trying to find another shred that has been left behind after the fire, after the evisceration. And that part of the story is gripping and wrenching, Feilin having to work with those who took everything from her in order to try and get something back. Which becomes the other large theme of the story for me, this idea of what that costs, of what it means to work with those who have taken so much. Collaboration. It’s a wonderful word for what’s happening because on the one level it means something productive and good, the best way to progress and move forward. On another level, though, it means betrayal, means aiding an enemy for the hope of doing some good, all the while still doing great harm. It’s a game that those left behind in the wake of tragedy have to play, though, in order to cultivate power, in order to try and help those they love. The story shows it’s also a trap, though, and in some ways offers no way to win. And where the story goes from there is a mix of hope and the recognition that sometimes the only answer is to meet monstrosity with monstrosity, to try and clear the board for something new. Another great read!