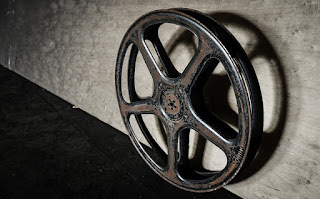 Okay yes. This is a story about reclamation and visibility of queer people in art, in cinema, about the harm that the "Code" has caused, the erasure and the general fucked-up-ness that it perpetuates, that queer characters can exist only if they are cautionary tales, only if their stories end poorly, if they kill themselves or die in an accident or otherwise are denied their happy endings. It's an unashamedly unlifting story that handles some very delicate imagery and subject-matter and triggers with care and skill. The mood of the story, the trappings, are of early cinema, black and white, the color palate very important, confronting readers with the past as it is perceived and the past as it was. The way that the story handles examining that the code of the motion picture studios that explicitly states that there can be no truly positive depictions of queerness is clever and I love the way that it breaks the fourth wall, the way it builds a story around Eugene, the main character, the doomed queer, and how it never gives up on him.

[SPOILERS FROM HERE] So I love the way this story is framed, too, where Eugene doesn't know that he's in a story, in a script of a movie. Which means he's the character in a movie in a story, physically dealing with the representatives from the corporate movie studios and the censors to ensure that he doesn't get to be happy. Pushing him to kill himself. I felt sold on this as an older movie from the earlier days of talking pictures, from the sort of ridiculous drama of Eugene's sister who's obviously the main character. That Eugene is the main character of the story but just a side character in the movie, there to be the bitchy gay guy, is great. It challenges the depictions queer people have been allowed to have and centers him in a story that was about his straight sister. The story rescues him in all the ways that matter, allowing him to be fully realized and more than just the tragic foil to his sister's rises and falls.

In the end I just really like this. It mixes the tragic elements, the pressure to be tragic, and makes it into something triumphant, something a little trippy but lots of fun, with personifications of text and subtext and a great and movie portrayal of how queerness has been framed by motion pictures. It's sensual and it's lonely and yet by the end there's an undeniable joy that's infectious and amazing. Go read this!
Posted by Charles Payseur at 1:00 AM