The cover says September but apparently I missed it at the end of the month so I'm considering the new Omenana issue an October release. And, as always, it is damn good. The stories are a rather even mix of fantasy and science fiction, with an toward the weird and unsettling. I love reading these issues because invariably I am left a bit shaken by it, in part because these stories do defy expectations and go places that I'm not always ready for. But the ride is always worth it, and so I'm going to get to reviewing! 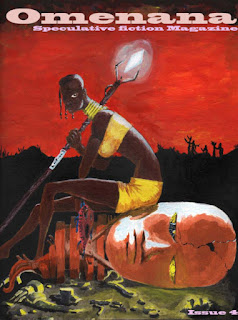 This is a story of brothers and myth and the beginning of things, of lightning and thunder. The plot follows the two titular brothers as they compete with each other, and I love how they are captured, Ara's slowness, his frustration at being older but less clever than Monamona, his yearning to do something that is his own, that will take him out of his brother's shadow. And Monamona not exactly seeing his brother's pain, his brother's struggle. Being more concerned with his own placement, his own glory. There is fraternal love here as well, but one that must deal with betrayal and jealousy, Monamona not wanting to credit Ara his accomplishments, sure that he could have done better, and yet instead of surpassing his brother he relies on stealth and trickery. So it's a story of brothers who seem to need to have some blood between them before they can reconcile, who are trapped in the motions of chase and pursue, all their power twisted into something destructive and fleeting. It shows well how naked ambition and betrayal of family can change even the greatest of gifts into futile gestures. The story really is mythic in presentation, the language strong and the images larger than life. I especially liked the dream imagery, the flying whales and the sense of magic that mixed with the otherworldly leading up to the massive party of the gods. A fine story!

In this story, a woman named Duriya is transformed into a hyena, and back again to human, for the want of an escape from an abusive husband. Carrying on with her husband’s brother, who practices a strong magic, Duriya is dissatisfied with being told to wait, being told that she will be freed eventually. Becoming a hyena is only supposed to allow her to travel to meet her lover, but more and more it’s becoming something else, and I rather liked the idea that she was finding something for herself, something that her lover hadn’t considered. That she liked being a hyena, where females have more power, where she can seek her pleasure exactly as she sees fit. She feels the draw of that, the draw of being free from human constraints, and I like how hollow her lover’s promises sound in comparison to the joy she feels when cloaked in fur and fang. The sensuality as a hyena makes her human love affair seem tame, boring. She makes love with her human lover, but as a hyena her pleasure is so much more present, expressive, and wild. It’s a nice examination of freedom and choice and it’s fun and well balanced, slightly erotic even. So yeah, check that out!

Well this is certainly a dark story of a woman trapped by unhappiness, trapped by her situation, by her birth. Never wanted, she has grown unhappy and injured, hurt, chasing things that fail to make her feel better. She has grown older and more bitter, willing to pass along her own pain because she has so much of it. Except that once a year, on her birthday, she decides to do something out of character. Most of the time this only further reinforces her solitude, her pain. It’s what she expects, because her life has taught her only that there is pain. This year she stops at a street magician, volunteers when he asks if anyone wants to fly. And I love what comes next, the mix of magic that might be as much the woman as the magician, which might just be this force inside her finally having an excuse to come free, which might be the happiness she always denied herself burst out. Of course, that only leads to the central tragedy of the story, the stark ending which is both heartbreaking and lifting, full of something like hope, like fear lifting. At its core it might be about finding the beauty within in the most unexpected of ways, beauty that cannot survive the stark reality that Felicity lives in. It’s a story with a nice humor, a great voice, and a subtle darkness that just starts to break at the ending. Another great story.

This is a rather sweet story about family and trends and peer pressure and technology. In some ways it’s a bit of an indictment of people who let technology take too much away from what makes us human, that make our accomplishments meaningful. In the story, a new tech called HaBeats emerges that allow people to set milestones and goals and then punish themselves if they don’t keep to their schedules. It’s a tech that’s fairly easy to understand because it doesn’t seem that far away. Aside from the aesthetic, it might be something that does exist right now, and it centers on the idea that people need help with their goals. And the main character here is left out because her parents won’t buy her one and she can’t get it herself. The pressure to conform is strong, and what’s more she wants help being better, to stop herself from stealing from her father. And yet as the story moves it becomes more and more obvious that the HaBeats exist as commodities, not as any sort of aide. They exist to be bought, to be popular, to get people to spend more, not less. And the more the main character sees the less the HaBeats appeal to her, because it does take something away from human will. And also because, for all it’s novelty, it doesn’t even really work, and for all that the tech comes in custom colors, they become simply items of fashion, and fashion that seems out of place for the main character, who comes to appreciate some of the old ways and some of her own power. It’s a nice story that walks the line between anti-technology and pro-human, and I think it ends very much on the pro-human side, not against new technology but definitely not slave to it. A fine tale!

Well I don't really want to call this story fun, because it's rather shocking at times with a strong vein of science fiction horror. There is abuse and there is grimness and there is some very dark material. For all that, though, it sort of is a fun story, one with lots of action and strong characters acting out of desperation, out of anger and hope and need, being controlled in many ways by creatures that are on Earth to multiple and gain in power. For what purpose exactly is yet to be seen but the story unfolds like a good horror movie, building things, laying the groundwork for a creepy mystery that can't be examined too closely because everything's happening too quickly. There's such a focus on surviving that dealing with the implications of every action is difficult. And the story brings up the ideas of agency and legacy, children destined to kill their parents, parents in some ways aware of that but still fighting it, not willing to work with their children because of old prejudices, because they don't think it's possible. If they killed their parent, then what's to stop anyone else? It's a nicely tense, nicely creepy story that would make one hell of a movie, the visuals all arresting and strong, the characters relatable, stubborn, he setting visceral. A very good, heart-pounding story.

I'm not sure that I'm smart enough for this story but I find a lot about it delightful. Difficult and pulsing with pain and anger, but there is something to be said for what I think it might be trying to do by co-opting Lord of the Rings iconography and mixing it with the fight to end Apartheid. It's in some ways the old joke that white people care more about elves being enslaved in a fictional setting than they do actually people being enslaved here on Earth. The story follows a man fighting against the white horde of evil, of the terrors that lurch out of Europe and descend upon Africa. There are trolls and mages and wraiths and Balrogs and other creatures that firmly anchor the story as LotR-based, but it flips a lot of the imagery. Instead of an evil dark arm it is an evil white army. It shows with striking clarity the "good" guys and the "bad" guys and, more, throws in the face of anyone who doesn't want to see that this is exactly the sort of story that they like. That they love the story of the oppressed overcoming the mighty, that they want to see the evil empires fall and be punished. Except when it's real. Except when they might actually have to do something here, now. Without the distance of fantasy, there is a deep uncomfortableness about the story. One that forces people to question their own mental narrative of who is good and who is bad, and what side they are one. It's clever and great. A fine way to draw this issue to a close!
Posted by Charles Payseur at 1:00 AM