Quick Collections - Dominion: An Anthology of Speculative Fiction from Africa and the African Diaspora (Volume One), ed. Zelda Knight and Ekpeki Oghenechovwe Donald 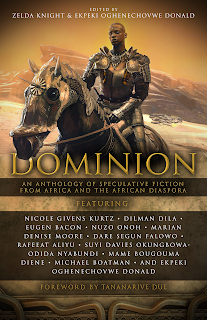 I’m back looking at a short fiction anthology that brings together thirteen works of speculative fiction from Africa and the African Diaspora. Domunion, edited by Zelda Knight and Ekpeki Oghenechovwe Donald (and published by Aurelia Leo), doesn’t limit itself to just one kind of genre, or even one kind of form. It includes science fiction and fantasy and horrors and blends of all of the above. It includes a poem, as well, and stories range from fairly short to quite long. The lack of a specific theme, though, doesn’t mean that certain elements don’t recur.
Indeed, the binding element of the anthology for me is recovery. Is something more than survival. Almost all of the works include characters dealing with settings and situations that are deeply broken. Many take place in futures defined by devastation and loss. Some cataclysmic, some corrupt, but all of them touched by deep wounds. Defined by histories where people have been exploited and dehumanized. In “Clanfall: Death of Kings” by Odida Nyabundi, the future seems largely absent of humans, but the legacy of brutality and conflict remains as clans vie for power and influence. Those themes are repeated in “Ife-Iyoku, the Tale of Imadeyunuagbon” by Ekpeki Oghenechovwe Donald, where post-disaster humans have developed powers to help them adapt to the new altered landscape, but have slipped into the same kinds of thinking that led to disaster in the first place.
Again and again, people come up again the abuses that have cycled through history. Predation, from the twisted vampire take of “Trickin’” by Nicole Givens Kurtz, to the more subtle ways that capitalism and the dangling carrot of “a better life” can get in the way of happiness that “The Satellite Charmer” by Mame Bougouma Diene reveals. In both, people find themselves lapsing into the tired rhythms of violence, deceit, and insatiability. Things that lead to death, to patterns that become burned into the fabric of reality. Not that the collection isn’t hopeful. Many of the stories reach for something beyond the repetition of past abuse and suffering. But there is a recognition that damage done cannot always be undone. That regardless of how much people might want things to have been different, the path forward is defined by where the past has led, and for people and peoples who have faced incredible difficulties and injustices, that path forward might wind through some shadowed places heavy with hurt. Though sometimes, as in the beautiful poem “Emily” by Marian Denise Moore, imagining what a path back might look like, a rescue ladder lowered from the present into the past, can also be a rewarding and magical experience.
Sometimes my favorite stories, though, are the ones that take a bit of a brighter tone when dealing with even their difficult subject matter. Stories like “Red_Bati” by Dilman Dila finds a sentient robotic dog grieving the loss of his family, but determined to live, even if it means rebelling against the system that made him. The story is fierce and fun, charming and full of hope, even as it navigates the grim realities of Bati’s situation and the weight he carries in the form of an electronic ghost. Meanwhile, in Rafeeat Aliyu’s “To Say Nothing of Lost Figurines,” an unlikely pair finds themselves working together to recover a stolen item, and maybe make a statement about closed borders and intolerance at the same time. It’s fun and sharp, looking at a corrupt bureaucracy and the ways that it protects criminals from justice.
As a whole, the anthology showcases a wonderfully diverse roster of settings and tones. The world building is expansive, vivid, and takes readers on a tour of futures, planets, and situations closer and more intimate still. Magic mingles with technology and swirls into a draught that tastes of blood and dirt. Hardship and loss...and love. And the result is something that’s refreshing, invigorating and alive with promise. A wonderful project!
Notes:

“Trickin’” by Nicole Givens Kurtz
A wicked take on both vampires and Halloween through the lens of a post-apocalyse. Very grim, rather violent, but well built, the mythology interesting, and the ending haunting.

“Red_Bati” by Dilman Dila
A sweet story about a robo-dog and a mission to remember his former (now deceased owner). Kinda love that it’s a heist story but the main character is stealing...himself. Wonderful, heartwarming, fun.

“A Maji Maji Chronicle” by Eugen Bacon
A strange tale of time travel, magic, and history lessons. Pickle is great, and I love the way that he’s taught of the responsibilities of being a magic user, how power can corrupt so much, so completely, and how careful it needs to be watched.

“The Unclean” by Nuzo Onoh
A difficult read but also a powerful one, exploring the ways that women are oppressed, the ways they are put in impossible situations, preyed upon, abused. Lots of content warnings here, but it’s sharp and not utterly hopeless. Just...not easy.

“A Mastery of German” by Marian Denise Moore
An interesting take on memory and inheritance through a science fictional lens. The dialogue is sharp and the narrator has a great energy is not about wasting time. And I love that she can see the project in ways the scientist can’t, both of them ignorant of certain areas of the work but her, at least, aware of the ethical lines that probably shouldn’t be crossed...at least without compensation.

“Convergence in Chorus Architecture” by Dare Segun Falowo
Strange and dreamlike, the piece focuses on movement, on theft, on transformations. In many ways it’s a sad read about people stolen from their homes, who are unable to return as they were. What they do instead, though, and how they fit into the ongoing push and pull of theft and power, is interesting and inspiring. A long, wonderful read.

“Emily” by Marian Denise Moore
Oh poetry! Beautiful and haunting. Love the way the piece bridges past to present, imagination and horror and power all at once.

“To Say Nothing of Lost Figurines” by Rafeeat Aliyu
So much fun! I love the world building, the mix of magic and science fiction, and how it all fits together. The two mains are an interesting pair, and make for a mix of comedy and something more serious. Would totally read more about their adventures.

“Sleep Pap, Sleep” by Suyi Davies Okungbowa
A nice exploration of cycles, of guilt, of a man trying to get out of the shadow of his father but also afraid to. Caught in a trouble he’s brought on himself and only digging himself deeper into the grim shadows he stumbled into. There are rigid rules that must be followed, and breaking one leads to the breaking of all, and all the consequences that goes with it.

“Clanfall: Death of Kings” by Odida Nyabundi
This is wonderful. The world building is amazing, the political situation delicate and complex, the characters strong, and I want more of it. I will go out and seek it where it lives. But yes, a fantastic introduction to a world and a situation, and one I would gladly read much more of!

“The Satellite Charmer” by Mame Bougouma Diene
A strange and aching story of a man trying to fit into his life in a place marked by the scars of exploitation. Who finds himself making terrible mistakes because he doesn’t know what he really wants, because he can’t think to ask or make himself vulnerable, and when he can, there’s no real help for him. The piece deals with exploitation in some real ways, and is a grim and difficult read at times, full of yearning, but quite good.

“Thresher of Men” by Michael Boatman
O-kay. This is probably the most disturbing of the pieces so far, a horror story that does shy away from gore and violence to show the unsettling and upsetting things that have happened, that are still happening. It reveals a history of horror finally coming home to roost.

“Ife-Iyoku, the Tale of Imadeyunuagbon” by Ekpeki Oghenechovwe Donald
Another difficult story but well built and executed. The character work is solid and the focus on consent is great. It rejects gendered roles called necessary for survival by taking the value out of mere survival and placing power in something more.
---